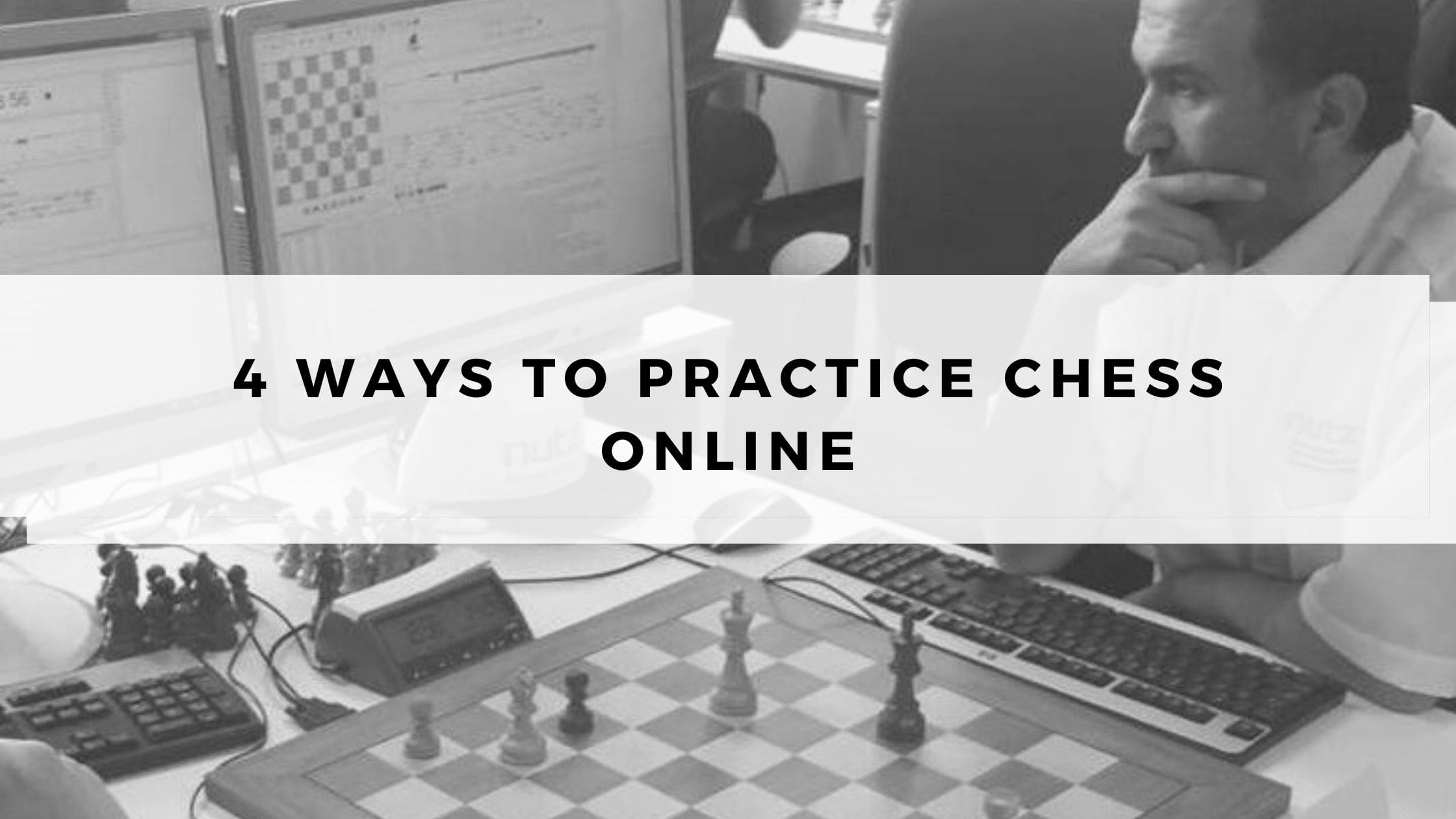 In this post I will discuss with you a few proven methods to practice chess online. My focus is on maximizing the time that you spend online reading chess news, following live tournaments or playing blitz. For non-professional players, like you and myself, it is very important to make the most out of those hours, in order to make the learning active, and NOT passive.

So, what are my favorite 4 ways to practice chess online? Here’s what I am going to discuss with you: 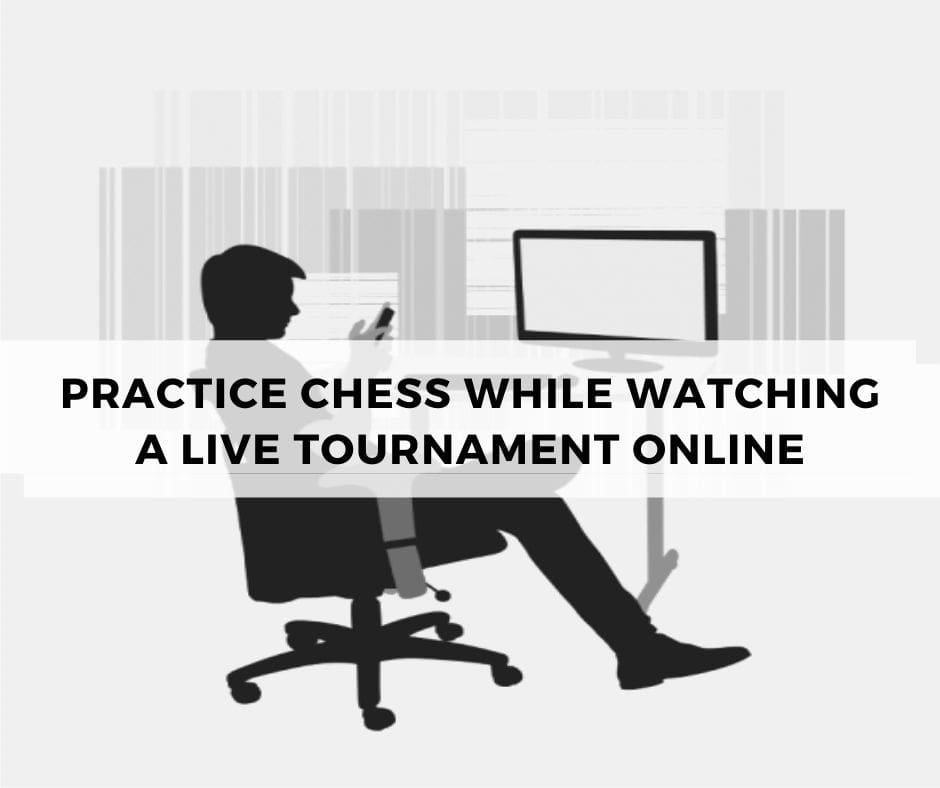 Do you enjoy watching live commentaries of top tournaments online? I totally do! I could spend hours and hours watching them, like a real TV show (it actually is!). And in fact I do spend such amount of time every now and then (on the weekend!).

And yet, this is a very passive way of practicing chess and learning in general. By saying “passive”, I mean that your brain is not actually producing any real work, it’s just learning by watching something that happens.

Now, don’t get me wrong, learning by watching is still a good way to do it. It’s what all kids do in their early years. However, as the brain gets older, watching becomes a less effective way to learn new things, because our memory is less sharp and because of the many thoughts that live in our brain. Therefore, we are better off learning by DOING. This is active learning for me.

So, back to watching a live commentary (nowadays often given by very strong GM — I am currently keeping an eye on the chess24.com live commentary for the World Chess Championship 2018, and there are Svidler and Grischuk commenting, two elite-GM!). By listening to a high quality commentary for sure you will listen to many interesting things. GMs have a lot to share about openings, strategic plans in the middle game as well as must-know positions in the endgame.

The problem is that all these things will just “pass by” in your brain. Chances to forget them are much higher than to remember them, for the very simple reason that in the moment you hear them, you miss the opportunity to put them into practice. Just watching a GM explanation is not quite enough.

My reasoning becomes more true the stronger you are. If you are just learning the basics then even passive learning will make you jump ahead by many steps. But as you become stronger, further improving requires much more effort than “just listening”.

Here’s what you should do to make your learning process more active while still enjoying the live commentary of a top tournament:

Now you will have two new files. The first contains a bunch of opening positions, whereas the second contains middle-game positions. Both have preliminary comments and evaluations.

Here’s what you should do now to continue your active chess practice. You can work through the steps below either after all games are finished, or in the breaks that the commentators will have.

For the second file you’ll have to follow a similar procedure:

When you are finished with these changes into your repertoire file, you will have achieved 3 objectives: 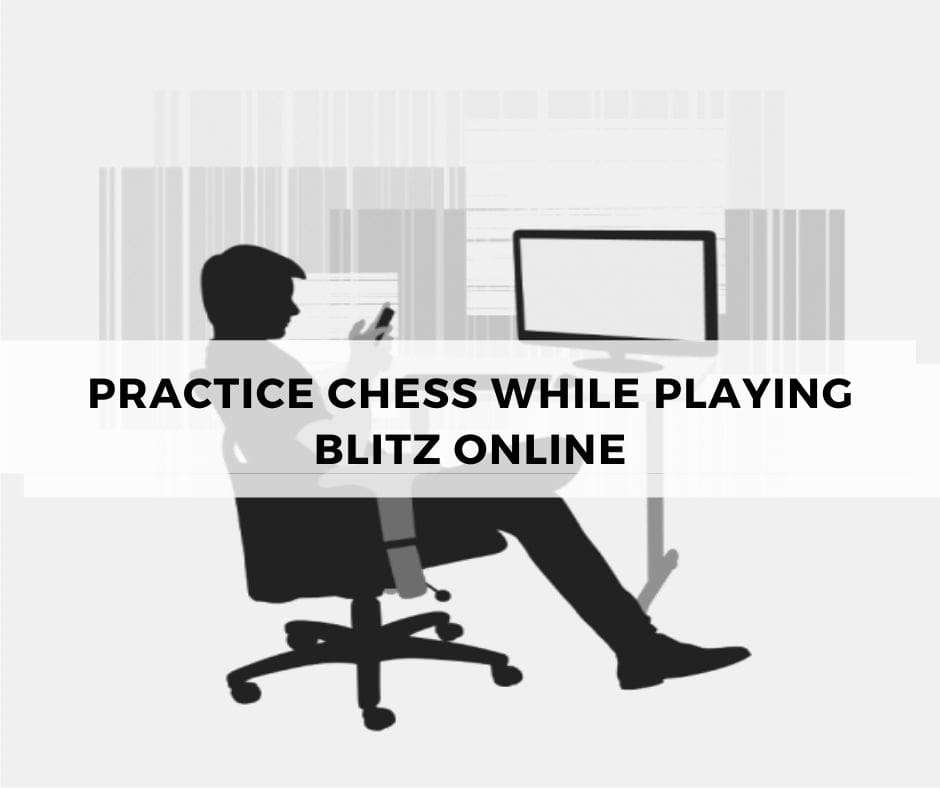 The other thing we, non-professional chess players, spend A LOT of time on is playing blitz online. You might have heard from many people that playing blitz games is not beneficial for your improvement and may actually hurt your performance in live tournaments.

I disagree. Even though playing fast time-control chess online is not the most serious training activity, you can still make the most out of it and transform a fun activity in a quite productive training.

First of all, I want to discuss the time control. Frankly speaking, I believe playing games such as 1' or 2' bullet is nonsense chess. To have something decent I strongly recommend you to play either 3'+2" or 5' games. These are the two formats known as blitz chess.

Now, let’s talk about the proper training. The largest pool of critiques to blitz chess is that it does not let you improve calculation or focus on your opening. I will share with you a recipe that improve both these aspects, by a great extent.

Analyzing games is actually a rather complex topic. However, for people with time restrictions, full-time job, family commitments, etc. here’s how you can do it in a reasonably productive way.

I have one final advice regarding point 5 above. You might consider to create a Database that can become a sort of Middle-Game Repertoire. In this database you will collect positions (and the main lines starting from there) that you think can be relevant for your Opening Repertoire.

I actually think that it could be a very clever way to memorize and keep practicing a lot of positions. In addition, it should allow us to avoid repeating the same mistakes in similar positions. However, I didn’t have time to test it myself yet… stay tuned! 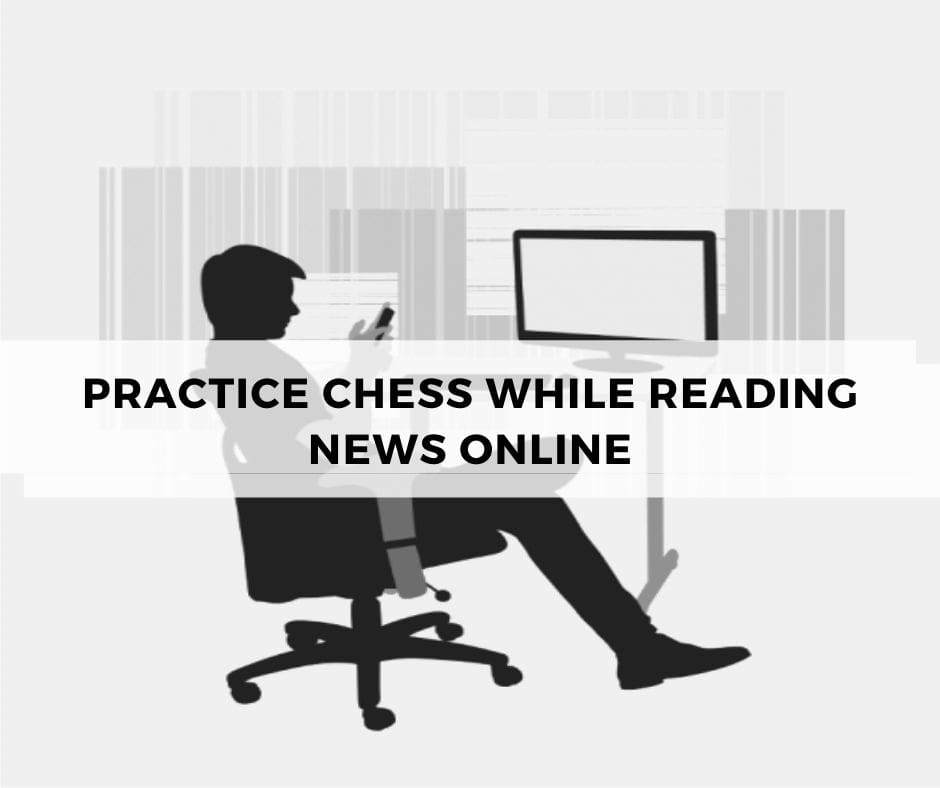 The other single thing we all spend quite some time on is reading news online, even when it’s about chess.

There are a few famous sources in this field. I cannot help but mentioning a few of them: ChessBase news, Chess.com blog, Chess24.com news, are probably the most well know. However, there’s a whole lot of websites and YouTube Channel that publish or stream on a daily basis. You might want to check out my Resource Page in this sense.

Now, reading news (or listening to them being told) is definitely a passive learning action. How can we transform it into an active one?

It turns out that most of chess news are about tournament games and standings, therefore it should not be difficult for you to extend the previous steps into this scenario.

When you read an article about who has won a tournament and how, there will be for sure many games analyzed in some detail. Open your Opening Repertoire and check if any of these games can be an useful addition to it. Actually, if you are working seriously on your repertoire, you should probably know the answer without even looking at it.

Sometimes a game that is mentioned in the tournament report is not extremely relevant for the Opening Repertoire, but contains a nice strategic plan in the middle-game, or a tactical pattern that I haven’t seen often. In such a case, I would probably add it into my “Middle-Game Repertoire”.

More simply, you would need a way to memorize the plan or the tactical pattern of that game. You can even do this by adding it into the Opening Files, but I don’t like to mix things up.

Often, the articles in the website that I mentioned above also contain a brief interview to some player. I always pay a lot of attention to the words of the players because they are the ones who have “studied” their game deeper than anybody else (while playing it), and probably have the clearest ideas a bout what happened in it — errors aside.

Therefore, when one of the two involved players mentions a variation, it means that variation was somehow important and caught her/his attention. Whether the variation was sound or not, it’s extremely interesting to analyze the mental reasoning that lead the player to consider that line. Then, depending on whether the player made an accurate evaluation or not, you might be able to take the improved version of that reasoning and make it yours.

The last piece of useful information in online chess news is typically the “related games” section. When talking about or analyzing a game, the reporter almost always refers to previously played games that have something in common with it. It can be the opening, or a tactical shoot, or an endgame position.

I think going through these additional games can be very beneficial too. It will take an extra effort (and time), but it does give a better (and broader) understanding of what happened in those games, their history and potentially why certain decisions were made.

If you have time and energy, you should go through each of the related games the same way you did with the main game! 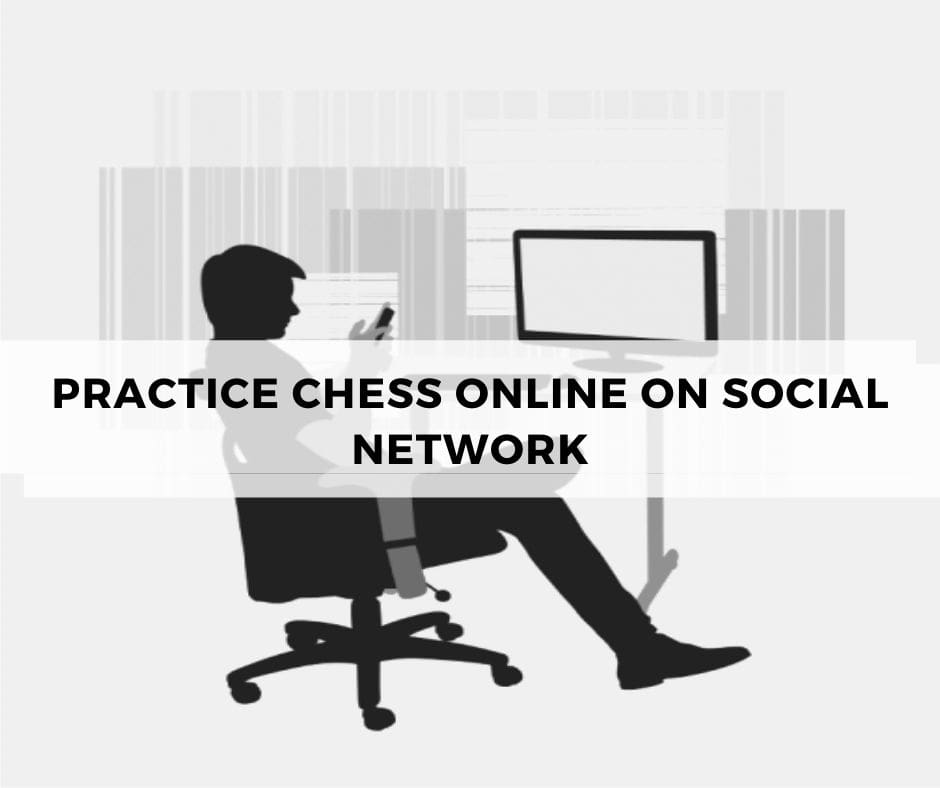 The last piece of our passive learning that I want to transform into active is all the time spent on social networks. We definitely collect a lot of information from social networks, daily, or even hourly. So how can we improve our chess practice in this regard?

My first and foremost advice is: Choose carefully who you follow.

Considering that almost all chess players have a public profile, on Facebook, Twitter and other websites, I think the first important step is to select carefully what person we get information from.

Sure, everybody follows the World Champion, but what are the chances that he will publish an interesting puzzle to practice with? Not very high. As far as I know, the World Champion mostly publishes things about his activity (advertisements and similar stuff).

You would make a much better usage of your time if you followed some of the online sources that publish puzzles and analyzed games.

To start with, I recommend to follow the social pages of the same sources that you use to read news: for example, Chessbase, Chess.com, Chess24, etc.

There are also strong players publishing interesting things, chess-related. But generally speaking keeping an eye on the platforms that I mentioned is a better strategy.

Now, let’s turn our passive social activity into something active. I think that should be quite easy, if you are willing to invest some energy in it.

Every time you see a puzzle published by one of your feeds, work on it! If you logged in to the social platform it means that you have some time to spend, so don’t make time as excuse for skipping the exercise.

If you see that one of your feeds has published a game with comments and analysis, go through it! You don’t have to do all the process that I explained above right now, but you should really go through the game to see if it can be interesting for you. If yes, then save it into your bookmarks and at the first good occasion analyze it more in detail.

People often publish in social platforms videos or even live streaming. If it’s about something interesting to you, for example one of your openings, and possibly by someone you know as a trusted source, pay a good deal of attention to it and try to grasp as many new information as you can. I think Peter Svidler, one of the top-GM in the world, often shares interesting tips and comments. GM Daniel King is another one that you should keep an eye on.

In this article I shared with you my advises on 4 different ways to practice and study chess online. Given the amount of time that we all spend navigating the internet these days, I think it’s of utmost importance to be able to optimize such time, taking advantage of any little chance to improve our chess skill.