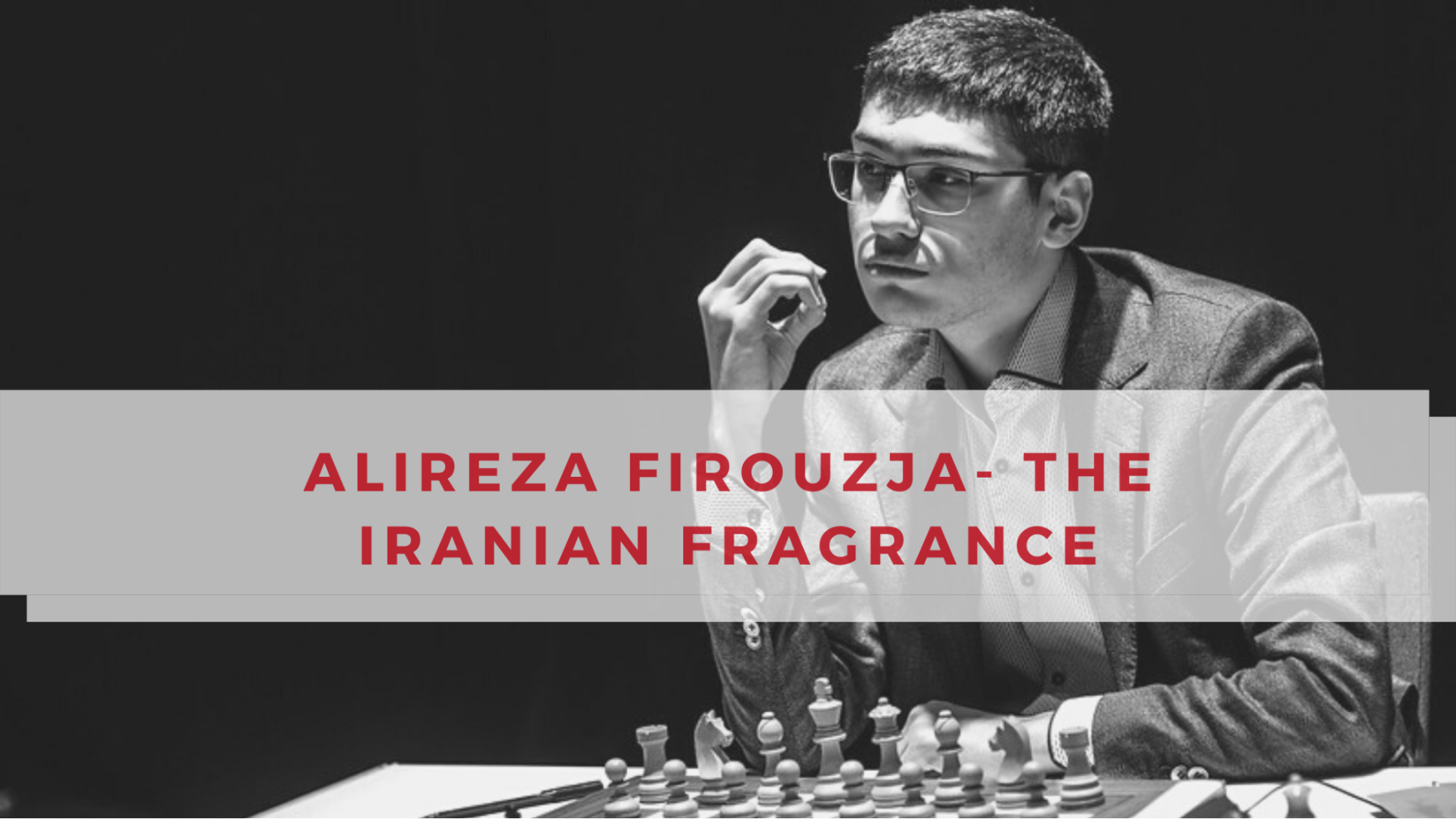 The debate over who is the greatest chess player in existence will never be resolved. Indeed, how can anybody predict the outcome of a match between Paul Morphy and GM Bobby Fischer if both of them were transported to our time and given three years to prepare using contemporary engines and databases? Now we’re talking about a Grand Master who may be a fantastic possibility, Alireza Firouzja, who is now ranked no. 2 with a rating of 2804.

Alireza Firouzja, an Iranian-French chess grandmaster, was born on June 18, 2003, and is currently ranked 2nd in the world. Firouzja has been ranked No. 2 in the FIDE world chess rankings since December 1, 2021, and is the youngest player to ever be rated 2800, beating Magnus Carlsen’s previous record by almost 5 months.

Firouzja was born on June 18, 2003, in Babol, Iran. Babol is a new label for the old city of Mamatir, which was formerly known as Barforush. The city gets a lot of rain. It is known for its orange orchards, earning it the nickname “Orange Blossom City.” He began playing chess when he was eight years old. Mohammadreza, his elder brother, was born in 1998 and is also a chess player. 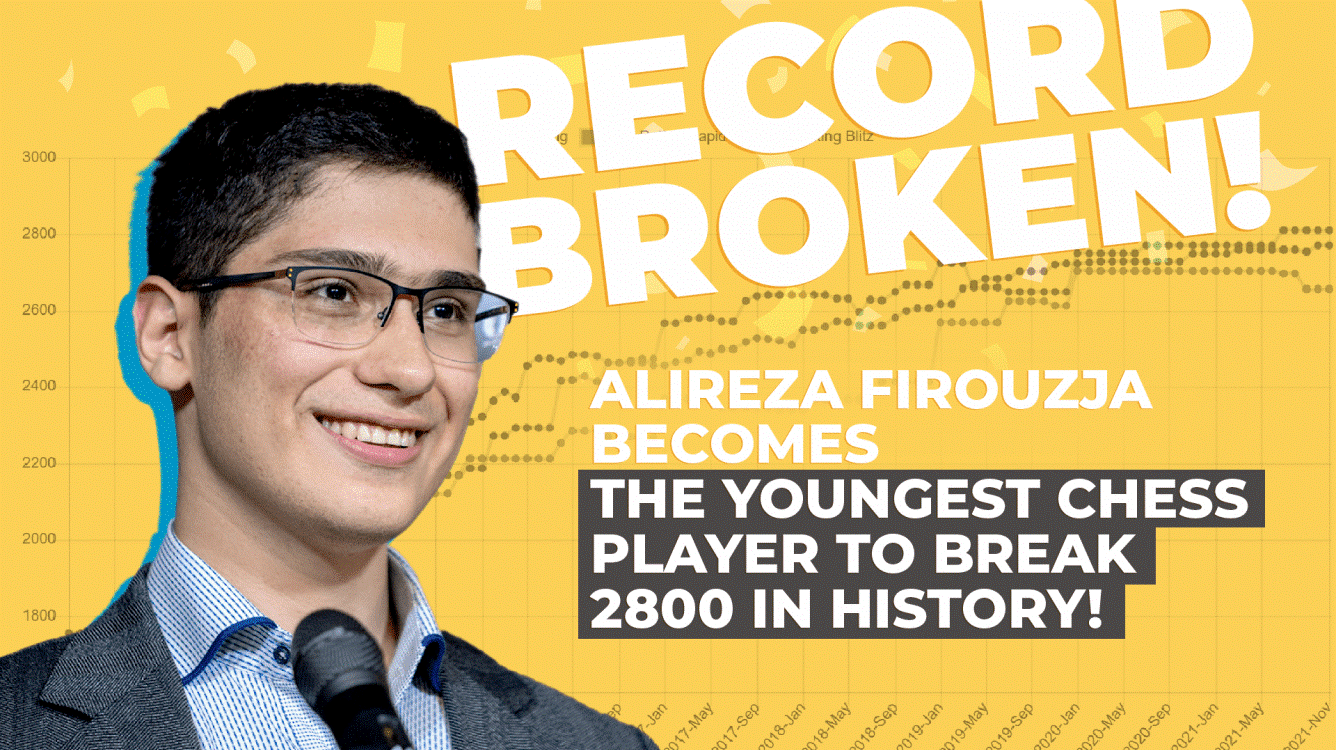 He went on to win the Iranian chess championship semi-final, which acted as a qualifier for the main tournament the following year, with an undefeated 7/9 (+5-0=4). He subsequently competed in the Qatar Masters 2015, the year’s most prestigious open event, where he finished with a score of 412/9, including victory over grandmasters Pavel Tregubov & Neelotpal Das.

After impressive achievements in the Iranian chess championship semi-final and the World Youth U16 Chess Olympiad, he boosted his rating to 2549 in January 2018. In February 2018, he took part in the Aeroflot Open. In the process, he accumulated and achieved his final Grandmaster (GM) norm, finishing 40th out of 92 players. At the age of 15, FIDE awarded him the title of Grandmaster.

Firouzja placed sixth in the 2018 World Rapid Championship, after Daniil Dubov, Shakhriyar Mamedyarov, Hikaru Nakamura, Vladislav Artemiev, and Magnus Carlsen, in a field of world-class players in Saint Petersburg. He finished 42nd out of 150 in the World Blitz Championship.

Firouzja’s rating jumped from 2618(FIDE) in January to 2723(FIDE) in December, making 2019 a noteworthy year for him. Firouzja has won the Iranian Chess Championship for the second year in a row in 2019. A slew of spectacular outcomes would follow. Firouzja won the tough Fajr Cup in Tehran, Iran, in February, beating off prominent grandmasters like as Pavel Ponkratov, Sergey Volkov, Yuriy Kuzubov, Sergey Fedorchuk, and Ehsan Ghaem Maghami, the strongest Iranian player of the previous generation.

He competed in his third Stars Cup later that month. The field was limited to four grandmasters this time: Safarli, Tiviakov, Bosiocic, and Alekseev. It was a double round-robin tournament. Firouzja went unbeaten throughout the tournament. He represented Iran in the World Team Chess Championship in March. Iran came in sixth position out of 10 countries. This string of positive performances boosted his rating to 2657 on the April 2019 ratings list, putting him in the top 100 in the globe

Firouzja was a late substitute for Wei Yi, who was unable to participate due to the COVID-19 epidemic, in the Masters segment of the Prague International Chess Festival in February,2020 a 10-player category XIX round-robin tournament. Firouzja won the event with a 2–0 blitz tiebreak tie break win against Vidit Gujrathi after a tie for first–fifth on 5/9. It was his first “supertournament” triumph.

In January, Firouzja entered the Tata Steel Chess Tournament. Parham Maghsoodloo became the tournament’s first Iranian competitor in the Masters' bracket. Firouzja was competing in a traditional round-robin tournament for the first time, and he said during an interview that his goals were not to win the tournament, but rather to get more experience at the highest level. In the end, he took eighth place.

Firouzja competed in Stavanger’s biennial Norway Chess Supertournament. Firouzja finished second, above Levon Aronian, Fabiano Caruana, and Jan-Krzysztof Duda, and behind Former Champion Magnus Carlsen. Firouzja’s tally of 4 won, 1 loss, and 5 draws would have tied him for first place under the regular scoring system, but Carlsen’s additional points from wins in the Armageddon portion dropped Firouzja to second place. For the event, he received a 2880 performance rating.

Firouzja placed second in the Norway Chess Supertournament 2021, behind Magnus Carlsen but ahead of a field that included World Championship contender Ian Nepomniachtchi and previous challenger Sergey Karjakin. In the October 2021 rating list, he finished with four straight victories and entered the world’s top ten (9th) for the first time.

The Grenke Chess Open saw Firouzja participate. He won his first two games but forfeited the third round due to his refusal to play versus Israeli FIDE Master or Bronstein. This was consistent with Iranian official policy, since Iran does not recognize Israel and punishes companies that compete with Israelis. Firouzja then fell to Antonia Ziegenfuss, ranked 1945, in the fourth round.

He placed 27th after winning his last five games. Firouzja competed in the 2019 Junior Speed Chess Championship, an online blitz and bullet tournament presented by Chess.com, in round one against Peruvian grandmaster José Martinez-Alcantara in May. The game was won by Firouzja. Later that same month, at Le Blanc-Mesnil, he competed in the French Rapid and Blitz Championships. He defeated Alberto David in the final to win. 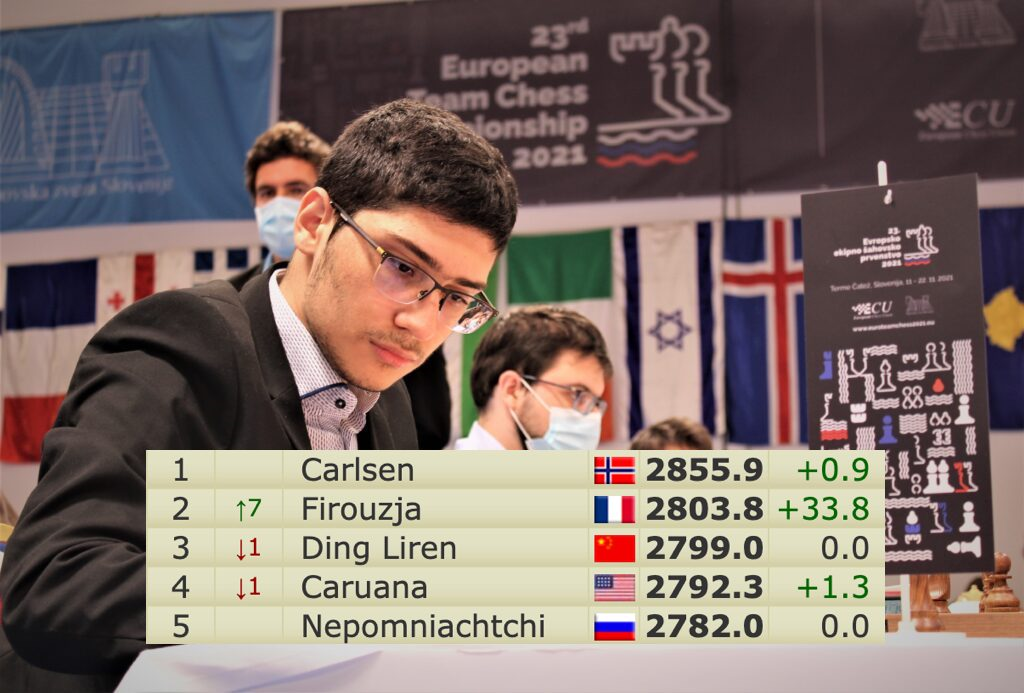 Firouzja stepped down in 2019 as a result of the Iranian Chess Federation’s anti-Israeli stance. He played for FIDE until mid-2021, when he became a French citizen and began representing France, where he had already resided.

Firouzja placed second in the Norway Chess Supertournament 2021, behind Magnus Carlsen but ahead of a field that included World Championship contender Ian Nepomniachtchi and previous challenger Sergey Karjakin. In the October 2021 rating list, he finished with four straight victories and entered the world’s top ten(9th) for the first time.

Firouzja also competed in the European Team Chess Championship in the same month, scoring 8/9 against grandmaster opponents for a tournament performance rating of over 3000. His rating rose beyond 2800 for the first time in November, and he was ranked second in December’s standard ratings list. He became the youngest player to get a rating of over 2800 at the age of 18 years and 5 months, shattering Magnus Carlsen’s personal best of 18 years and 336 days.

We can end this conversation by taking this quote from the great Magnus Carlsen. Magnus Carlsen remarked after winning the World Chess Championship 2021, “If someone other than Firouzja wins the Candidates Tournament, it’s doubtful that I’ll play the next world championship match.”