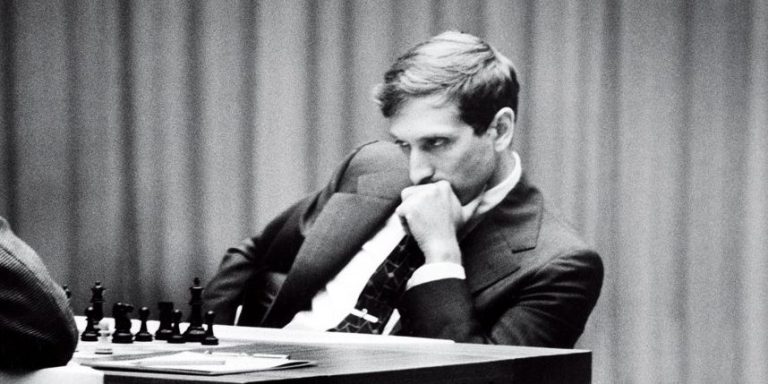 No one can deny that Robert James Fischer is one of the greatest minds in chess history. His playing style was puzzling to all the grandmasters of his era as it was simple and perfect! You can see exactly how he is planning to win and you are not able to stop him. In this article we are going to show you Fischer’s favorite opening with White to gain a quick attack on the kingside showing his tactical genius as well!

When it comes to winning with white. Fischer loved to employ the king’s Indian attack for many reasons, it is simple, clear, and systematic. The plan is always the same against almost all black responses!!

Together we are going to analyze some of his games against the best players of his time starting with the 1968 battle of Fischer against Geller.

Geller was famous for his deep analysis for the French defense. He revolutionized it showing the great potential to counter attack with black and how to win strategically using the French defense. In this game Fischer destroyed Geller’s favorite opening with the simple King’s Indian attack!

The game started as a normal French game with 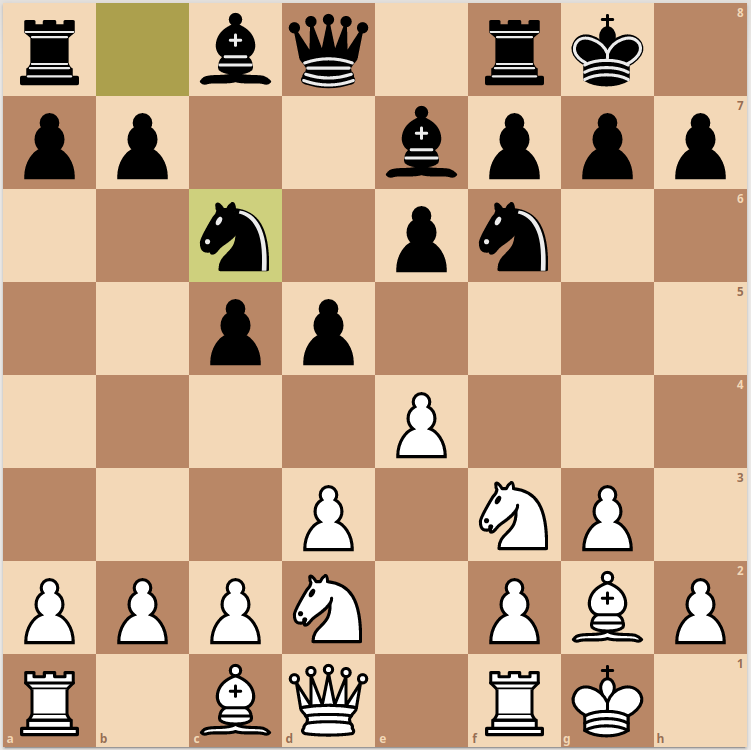 Until now it is a standard position for the king’s Indian attack Geller developed his pieces in a very harmonic way, controlling the center, safe king (or he thought it is safe!) and perhaps he was thinking about developing his queenside and trying to lunch a pawn storm on the center and queenside.

However, white will start to prepare for an attack on the center and the kingside by the next very important move.

the goal of this move is to prepare for the closure of the center with e5, vacate the f1 square for the queenside knight to transfer it into the operation area via Nf1–Nh2–Ng4.

till now it feels like everyone is going with his plan. White also develops his queen to further protect the center pawn e5 while black start his pawn storm on the queenside.

The modern approach in a position like this is 12 … Ba6 to force c4 in the future breaking open the white position on the queenside as quickly as possible before it is too late!

For white everything is thematic, he just develops his last piece into the game overprotecting the e5 square and eyeing down the black queen .Black idea is interesting, he wants to transfer the a8 rook into c6 square to overpressure the C file trying to penetrate the queenside.

Black achieved his goal while white showed black simply that his idea is not enough! He doesn’t have real pressure to do any damage to white position. Black tries the next move to vacate the a8 square for the second rook to triple on the c file while developing his last piece to the game by playing 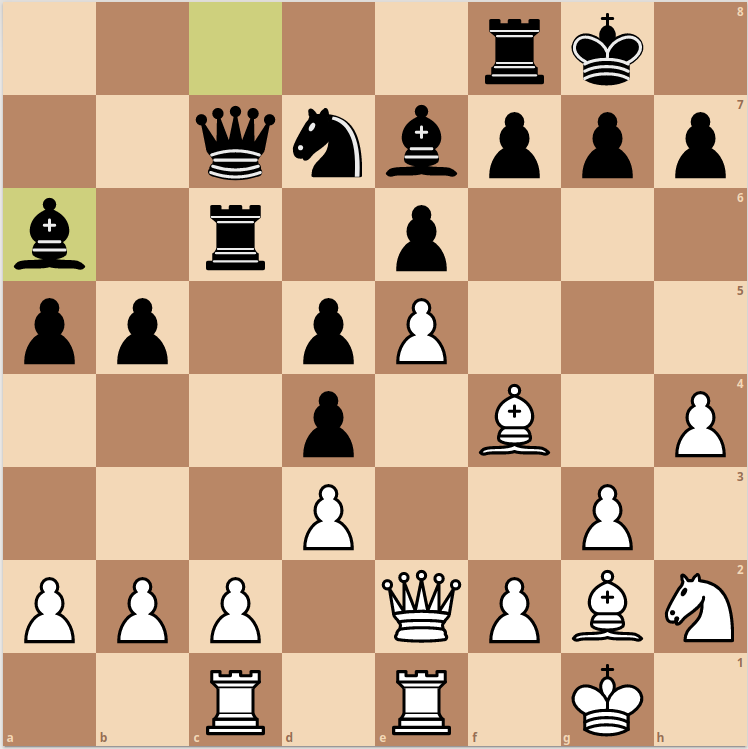 The problem with this move is that it is just too slow! White immediately takes advantage of the position showing his tactical skill and inflecting a permanent damage to black position by playing the next brilliant move.

Black accept the challenge, however it was maybe better to try the simple (17…Rc5 18-Bg2 Rd8 or Nb8 accepting a pawn down but keeping some pressure on the queenside and chances for a long term fight!)

an excellent move reminding black that the point of the king’s indian attack is to pressure his kingside to the point of collapse!

in case Geller is thinking about taking his pawn back with 20…Qxd7 then the simple Rxe6 Qxe6 fxe6 Re1 Bc8 and Nf3 simply clearly better for white. Black has a terrible bishop, 3 pawn islands, and weak d4 pawn .For experienced players such as Fischer and Geller it is just lost for black.

just in time, giving black no chance to catch his breath and transforming his positional advantages into a clear win. 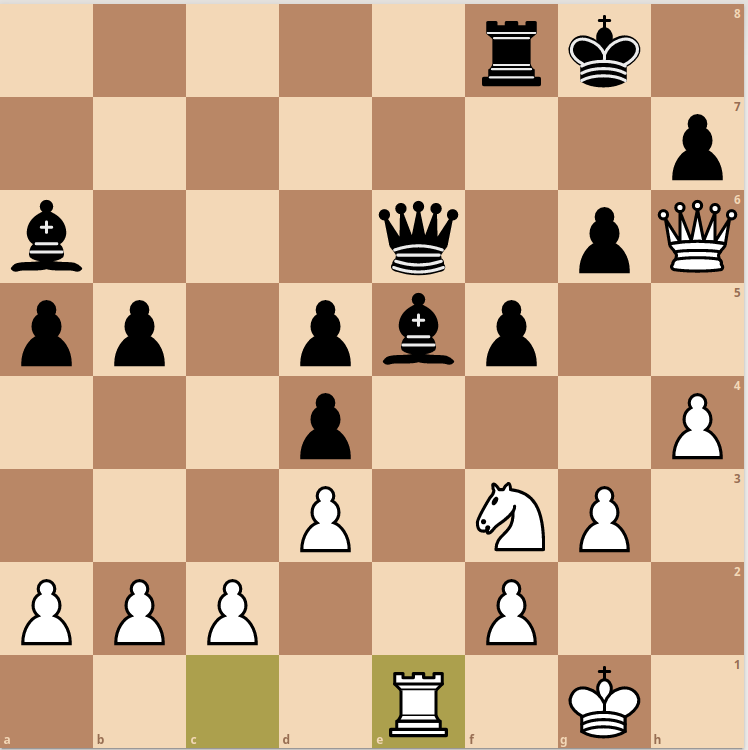 Pinning and winning! If black tries Bg7 then Qxg7+! Kxg7 Rxe6 and it’s a won endgame as the next move white will capture the d4 pawn having a royal knight against a very bad bishop with extra pawn as well

trying to mix things up.. but then Fischer finishes it off as it follows

and black resigns as the resulting position is completely lost as he is forced to lose the bishop on a6.

You can replay the whole game in my LiChess study.

The next game shows how quickly can black get crushed on the kingside if he underestimates white potentials!

this is a standard Sicilian position and it is especially popular for those who enjoy playing both the French defense and the Sicilian defense. The play usually is strategic and positional.

Refusing to go into the positional territory and transposing the whole opening into king’s Indian attack territory. 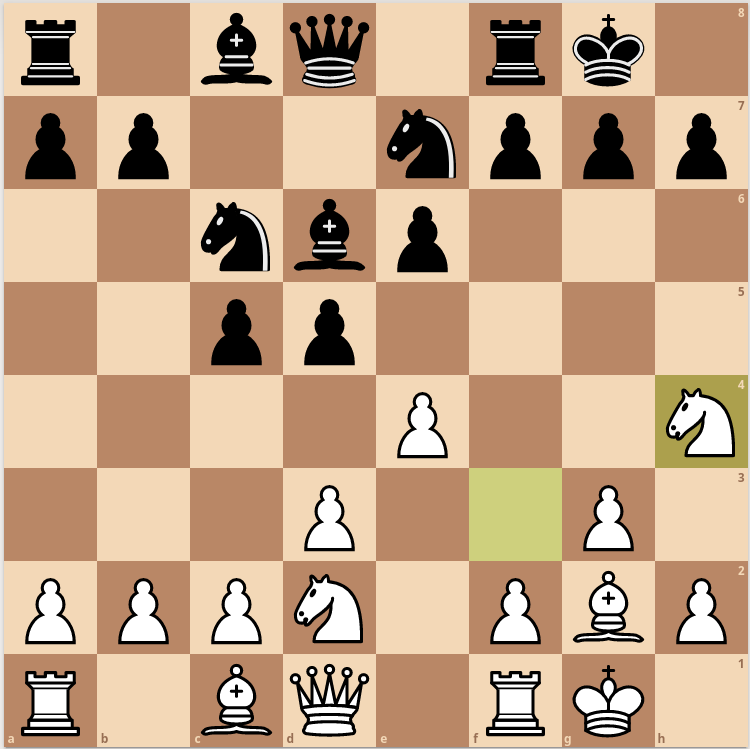 This is an interesting move. This move is aiming to quickly have the dual “f and e” pawns pushed up the board to get a quick kingside attack.

Black is trying to develop some sort of counter play on the queenside. However, this is just slow. Although an engine would tell you that black is fine. Black problem is the lack of a good plan. White plan is clear. He will push his pawns up the board, get more pieces around black king and sacrifice something to open up the position! But first thing is first when you have one move that can kill off your opponent idea do it!

This is the start of white aggressive play on the kingside.it is noticeable that 16.Nxc5 is a good alternative doing permanent damage to black pawn structure and getting the two bishop advantage. White is slightly better after the Nxc5 move. 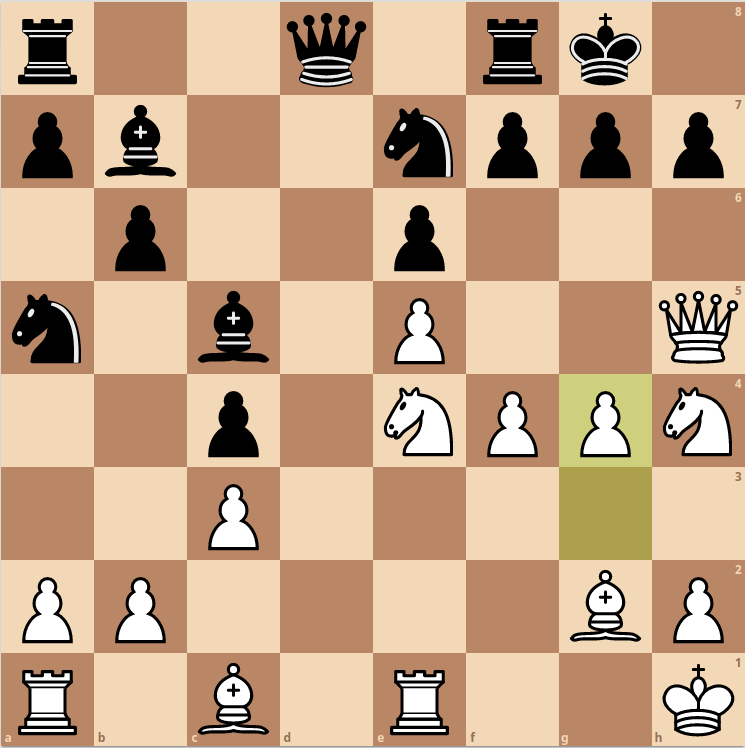 Black panicked seeing the simple plan of f5-f6. He wanted to reduce the pressure on the kingside, however it started to look more and more dangerous for black. Perhaps a simple move like Ng6 would keep the game in balance forcing some concessions and exchanges.

If black tries Kh8 the next moves of Nf3-Ng5 mixed with f5 is winning for white. Black is too slow to hold this position

All according to the plan, capitalizing on the dark square weaknesses and breaking through the kingside defenses. 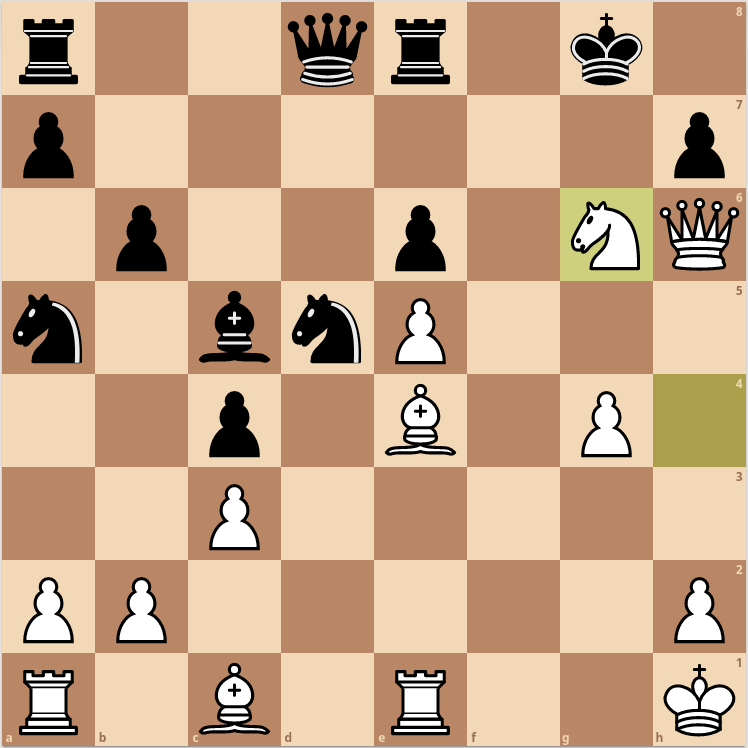 a killing blow ,the knight can’t be taken due to a quick checkmate Qxg6+ kf8 Rf1+and Rf7 mate.

You can rewatch the entire game in my Lichess study.

We will end up with an absolutely crushing game from white side. Black didn’t do any obvious mistakes or even inaccuracies. Fischer showed us again why the king’s Indian attack in the hands of an aggressive player is extremely deadly.

Let’s take a look at this famous game, that Fischer won with a famous combination.

Standard move for this opening and standard position that was played thousands of times. I would like to mention that this e5 is the key of all white attack. After black commit his king to the kingside by castling. e5 is a very strong move that prohibit the black king from having a natural defender on f6.it is also a move that gains space on the kingside.

This move is so important as it both gives more control to g5 square, open up the h2 square for some maneuvers like Nh2-Ng4-Nf6/Nh6+ and secures the f4 square.

and here Black a3 move is a real threat breaking the queenside making a lot of weaknesses, white next move avoids all that and shuts down black play.

Continuing with the plan of breaking open the queenside with c4,perhaps Ba6 followed by c4 is a little better as black will also develop a minor piece instead of moving the same piece twice. 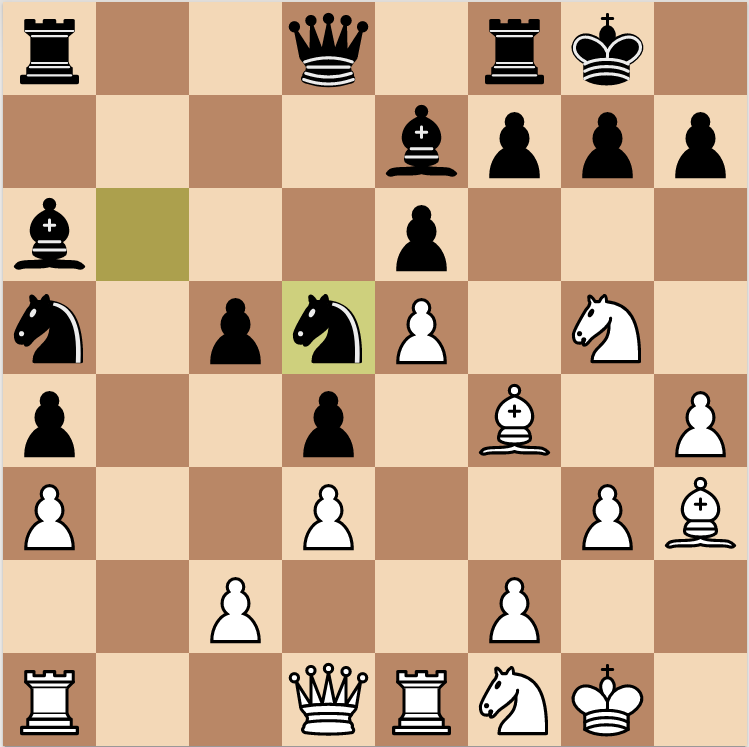 So far black did nothing wrong. His play is almost perfect and his strategic idea is sound The problem is… white play is so quick and natural that one wrong move from black would cost him the game as we will see.

Black needed to be extremely quick with c4! to ensure equal chances for the game!. He doesn’t have time for pretty looking moves like Nc3. 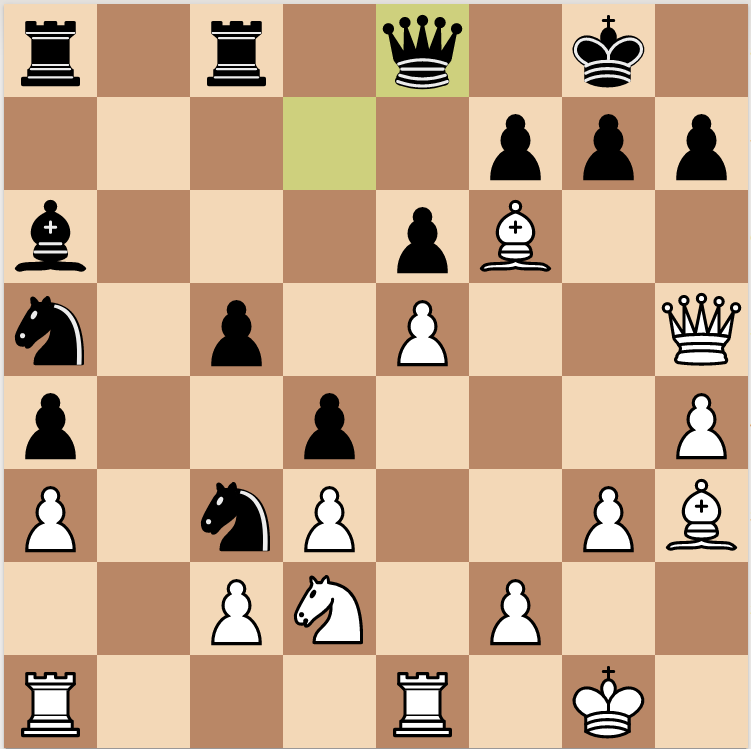 Ignoring the white threats hoping to be faster correct decision in some situations but not here! Bb7 was needed to control the long diagonal and provide defense to e6 if needed by playing Bd5 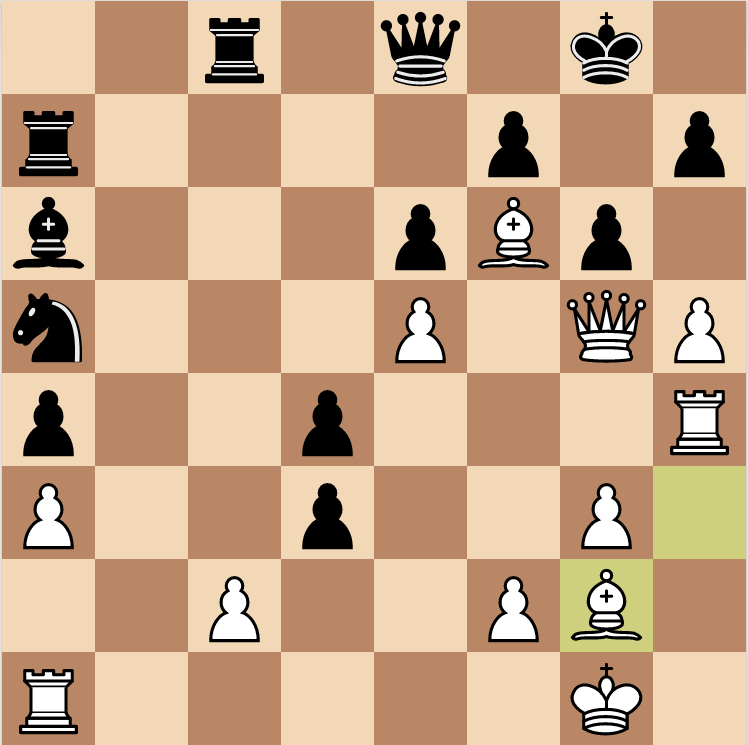 rerouting the bishop to the e4 square to get him to the black king as well!

You can replay the whole game in this LiChess study.

Through these three games we conclude that the king’s Indian attack is a dangerous weapon for white. Bobby Fischer used it against the best French/ Sicilian players of his time.

The king’s Indian attack is extremely annoying for the black player. if black doesn’t come up with a quick reaction, he will be destroyed in a few moves with brilliant sacrifices on his king!

We would recommend this opening for all levels of play. It is worth the time and effort to have it even as a surprise weapon for your opponent and it will serve your repertoire very well!