Who is Hikaru Nakamura?

Hikaru Nakamura is an American chess grandmaster and streamer. He was born on December 9, 1987, in the United States. In 2003, at the age of 15, he became the youngest person in the history of America to obtain the title of Grandmaster in the game of Chess.

Since the advent of live streaming, Hikaru Nakamura has become synonymous with the game of Chess. This is evidenced by the fact that he frequently interacts with fans on his Twitch channel, which goes by the name GMHikaru and has over 1.4 million members.

Even before becoming a popular streamer, he wasn’t exactly what you’d call a newbie. As was mentioned previously, in 2003, when Nakamura was just 15 years old, he was given the title of Grandmaster, making him the youngest individual in the history of the competition (GM). In October 2015, he reached a new personal best FIDE rating of 2816, which moved him to the number two spot in the world rankings.

In 2018, he started broadcasting on Twitch, rapidly developing a sizable following base and swiftly garnered fame in the gaming community. On top of that, he was responsible for beginning a Chess frenzy on Twitch, which led to thousands of people becoming obsessed with the classic board game.

One of the ways in which he contributed to increasing the popularity of Chess on the website was by arranging collaborations with well-known streamers from other games.

The Venture of Qualifying for the Candidates Tournament

The 34-year-old Grandmaster had a challenging run in the FIDE Grand Prix of 2022, in which he competed against well-known grandmasters worldwide, including Wesley So, Levon Aronian, and Anish Giri.

In addition to maintaining a significant presence in the community of competitive gamers, he is also active as a streamer on the platform Twitch in his spare time. Because of his strong play on the final day of the Grand Prix, he was invited to participate in the Candidates tournament, which is a tough competition.

With his victory in the sixth round of the third leg of the 2022 FIDE Grand Prix, GM Hikaru Nakamura not only gave his supporters a hat-trick but also won Group A and ensured himself a berth in the semifinals of the competition. Moreover, the American GM joined GM Richard Rapport in advancing from the Grand Prix to the FIDE Candidates Tournament. This is a highly significant accomplishment. 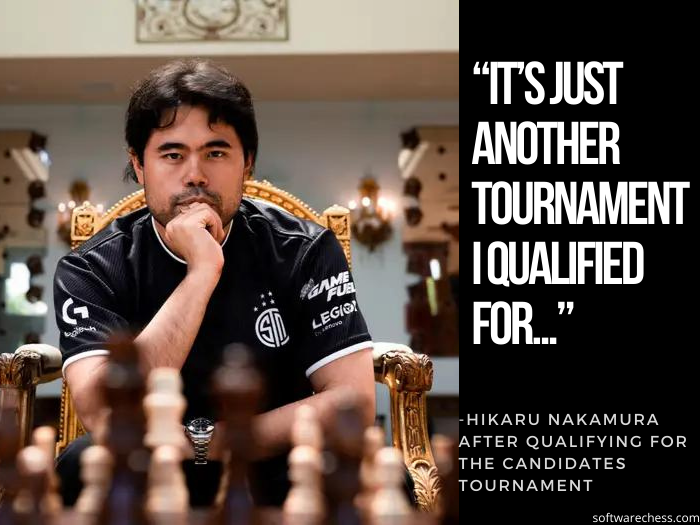 After Hikaru Nakamura’s victory over Andrey Esipenko, it was inevitable that he and Richard Rapport would place first and second in the FIDE Grand Prix. As a result, both players have qualified to compete in the Candidates Tournament, where they will defend their titles.

Hikaru’s top challengers, Levon Aronian, Anish Giri, and Leinier Dominguez, all lost. Hikaru’s primary opponent Maxime Vachier-Lagrave was held to a draw by Sam Shankland in the last round. As a result, every outcome went in Hikaru’s favor. The guy to keep an eye on is Amin Tabatabaei, who came out of nowhere and is already set to compete alongside Hikaru in the semifinals of the Berlin tournament.

Hikaru in the 2022 Candidates Tournament

Here is the list of matches for Hikaru Nakamura in the upcoming Candidates Tournament from June 16 onward. 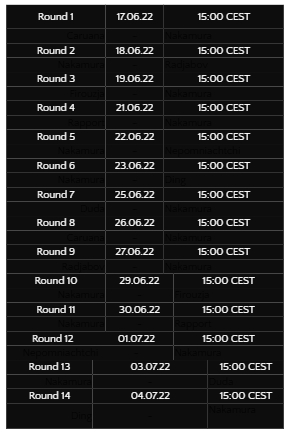 Can Hikaru be the World Champion?

The championship match will be played between the victor of the Candidates Tournament and the current world champion, making it the second most important tournament in the World Championship cycle.

So far, as Hikaru is on his run of triumph, he will likely win the candidates tournament. If this happens, only Magnus Carlsen stands between Hikaru and the glorious World Champion title.

Now, the question comes, “Can Nakamura beat Magnus Carlsen in a match?"

We will play safe here. Won’t make any judgmental comments. But, according to statistics, Magnus has clearly dominated Hikaru in the head-to-head matches. However, we’re leaving the latest FIDE ratings for both of them here:

What does Hikaru Nakamura do outside of Chess?

Hikaru Nakamura is considered very rich and has a mind of a business shark. In an interview with CNN, he said that besides playing Chess, he also earns in some other ways. In the same interview, he expressed his great passion for the stock market.

He also confessed that the prize money he earns from myriads of tournaments, he loves to see them being invested in the stock market. He keeps himself updated about the stock market to make the best profit out of it.

When asked if there are any similarities between Chess and the stock market, he smiled and replied,
“In Chess, it’s very much about planning and thinking things through logically, and if you’re investing – not day trading – then you try to understand the situation, the economics and the financial numbers, (to) make logical decisions. In Chess, you also try and control your risk-reward ratio.”