Different Types of Chess Sets: The Luxurious Ones 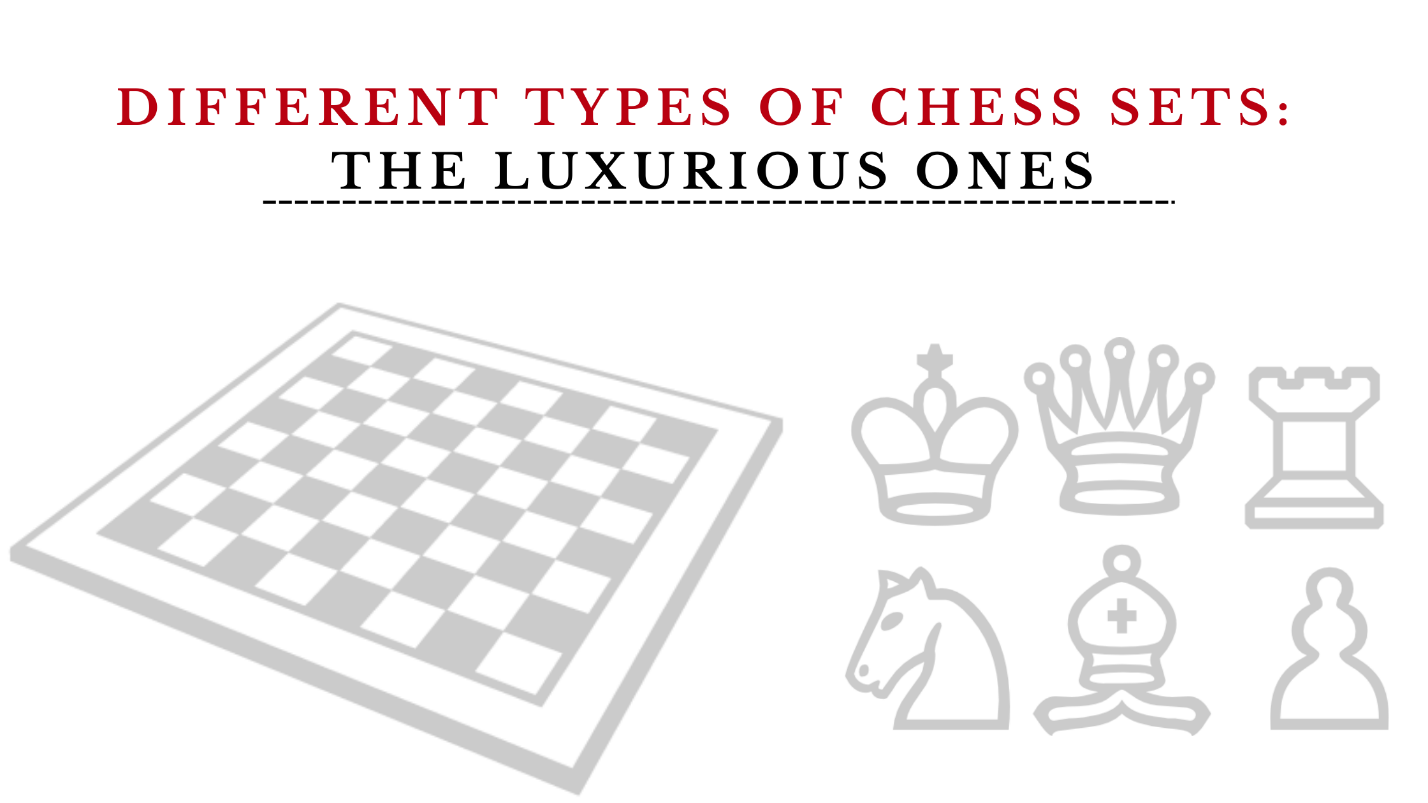 Different Types of Chess Sets: The Luxurious Ones

“Different types of chess sets?!” You might wonder, seeing the title at the very first sight. As the conventional chess game is played on a 64-square board, with each player starting with 32 chess pieces where each player begins typically with –>

But that’s not all! Chess is as much about strategy and tactics as it is about elegant and gorgeous pieces. Many people will showcase a polished hardwood set in their houses, even if they don’t play or even know the rules.

Although the Staunton pattern pieces have been the standard chess set for international competition for the last 150 years, there were many other traditional styles of chess pieces in use before the Staunton set became the standard, including the elegant Northern Upright pieces and the iconic characters of the Isle of Lewis chess set. This article tries to provide an overview of the various chess piece patterns and focus on some particular luxurious instances of chess sets.

The Staunton pieces, easily the most recognizable of all chess sets, are named after Howard Staunton, a 19th-century English master regarded as the world’s strongest player in the 1840s. The pieces were developed by Nathaniel Cook and first made by Jaques of London in 1849, but Staunton contributed his name to market them in one of the earliest examples of sports sponsorship.

Staunton pieces are shaped like smooth columns with a broad base and a stylized motif representing each piece on top. The king, whose crown is typically crowned with a cross, is the most recognizable Staunton piece. 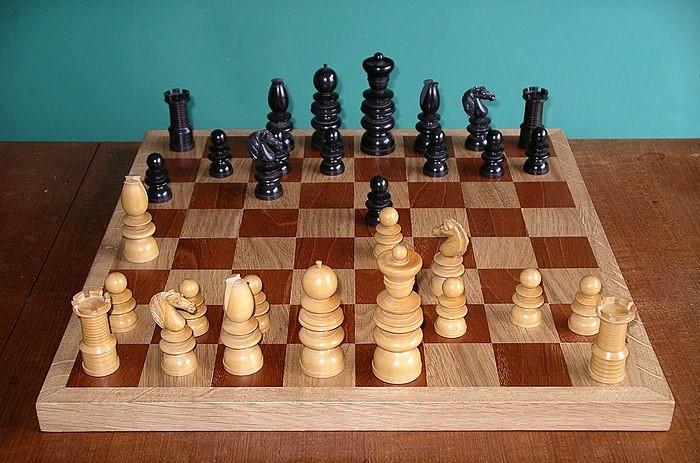 A variety of piece styles were in use around the world when they were introduced. Chess had grown in popularity over the previous decades, and interest in international play and competition had grown, but there was no standard in place at the time. When playing with an opponent’s set, players who are experienced with other styles of pieces may find themselves at a disadvantage.
The Staunton pieces were trendy quickly and have been the standard design ever since. 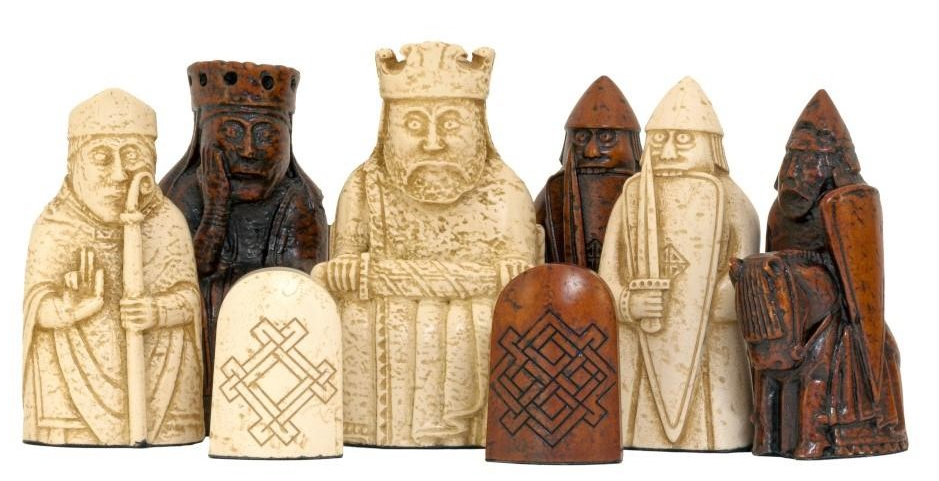 This form of chess set is based on a collection of 12th century pieces discovered in 1831 on the Isle of Lewis in the Outer Hebrides off the west coast of Scotland, often known as Lewis Chessmen or Uig Chessmen. They were discovered by a man named Malcolm Macleod, who was looking for a lost cow at the time, according to one narrative.

The majority of the pieces, as well as a number of other game pieces discovered in the same cache, are currently in the British Museum. They are thought to have been created by a skilled craftsman in Trondheim, Norway, in the late 12th century and were lost or buried on their route to Norse colonies in Ireland. 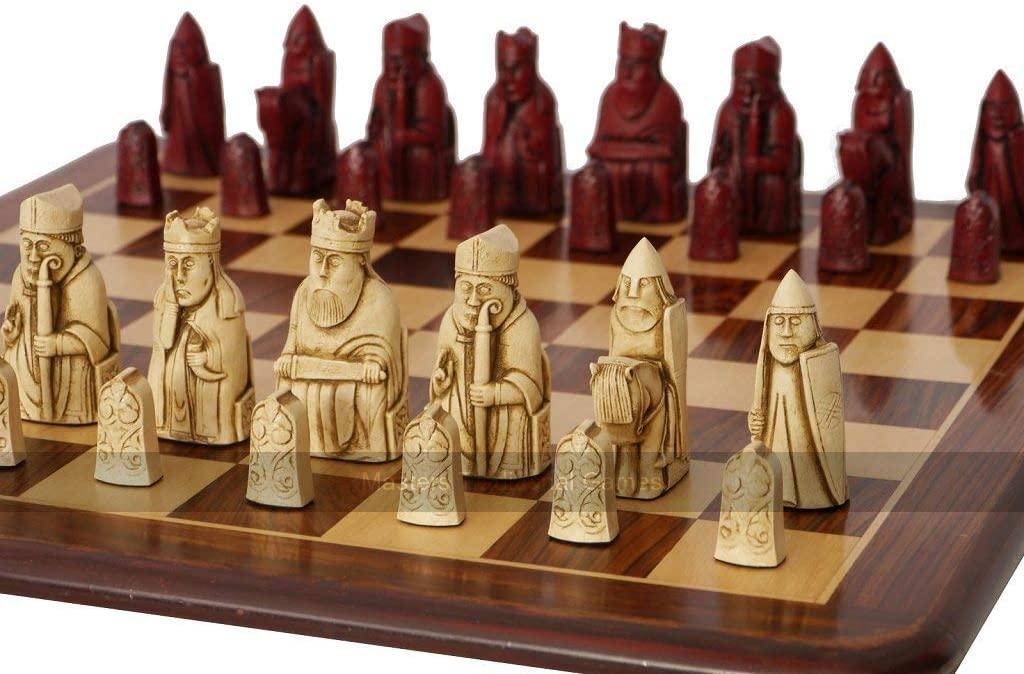 The intricate figures were originally carved in walrus ivory and are famous for the expressions on each character’s face: the queen appears bored, the king stern, and some of the rooks appear to be biting fiercely on the rims of their shields.

While the designs may be distracting for practical play (despite the pieces being very sturdy and stable), they have been popular display pieces and have even appeared in one of the movies of one of the most famous film series of all time – “Harry Potter.”

The St George, Calvert, and Merrifield patterns were among a variety of similar English playing sets available in the late 18th and early 19th centuries. These patterns shared a ribbed column resembling a stack of orbs and disks, identical to the French Regence set. Still, they also shared the mitered bishop of the Upright style, and the queen was usually topped with a point or coronet, making these pieces more distinguishable than the French style.

The roofed rook tower, sometimes topped with a flagpole as in the Barleycorn design, is a characteristic feature of the Lund style. These sets were designed for serious competitive play, and their popularity decreased only after the Staunton pattern was introduced. 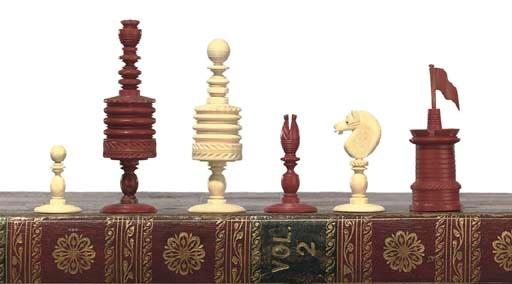 In the early nineteenth century, the English Barleycorn type was one of England’s most famous chess piece patterns. They were usually made of bone instead of wood, and the black portions were frequently painted red. The pieces have slender stems rising from a flat base, and the larger ones usually have a central ‘drum’ that is lavishly ornamented.

The flagpole atop the rooks is a typical design component, albeit it wasn’t included in every set. The pieces were delicate and may collapse or break with harsh handling, and the somewhat rich decoration was distracting to the eye, which was a frequent problem with the design - at least as far as practical play was concerned. Nonetheless, they were popular into the nineteenth century, though their popularity waned after the advent of the Staunton pattern, as it did for many other designs. 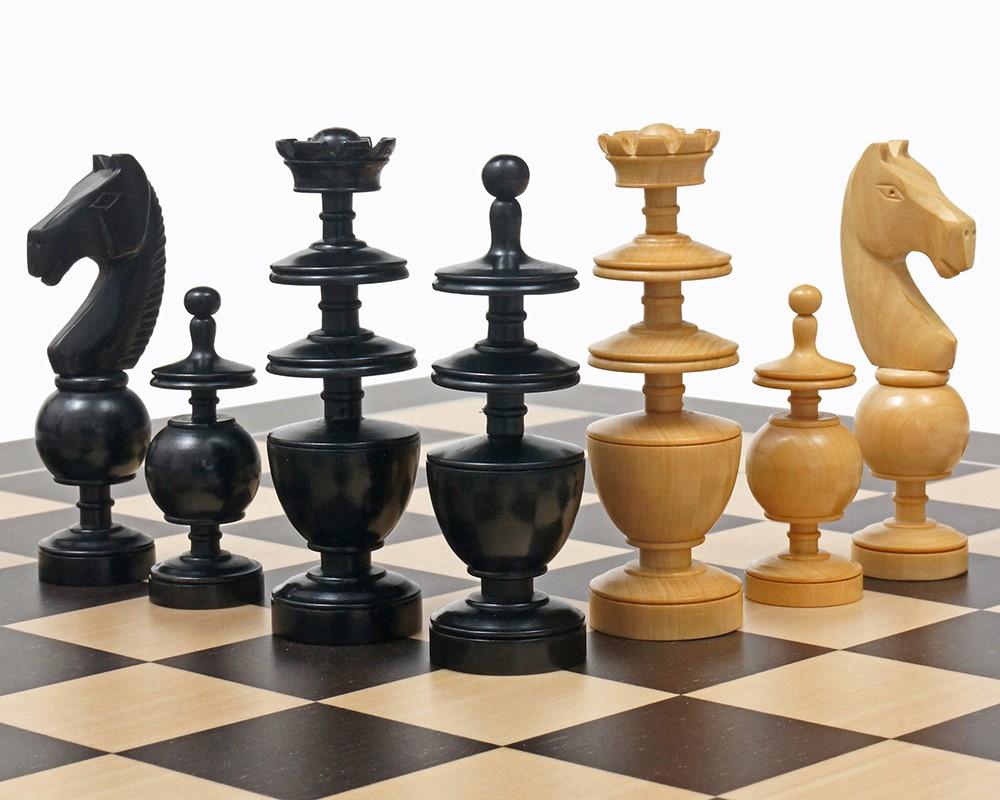 The Café de la Régence in Paris, one of the most prominent chess centers in the 18th and 19th centuries, is the origin of the French Regence pieces. Almost all of the period’s great masters performed there, as did well-known individuals like Voltaire and Napoleon. The Café de la Régence’s reputation as a chess hotspot was such that the pieces used there - which were of a typical pattern throughout Europe at the time - were given its name.

The pieces resemble stacks of orbs and disks, and the queens, bishops, and pawns, like many other sets in use at the time, are nearly identical, differing only in height, which often confused players unfamiliar with the pattern, and explains why the Staunton pieces quickly supplanted them. On the other hand, French Regence pieces were still in use in the twentieth century.

The Zagreb style, as well as the Dubrovnik style that preceded it, are Eastern European variations on the conventional Staunton pattern from the mid-twentieth century.. They have a smoother, more rounded feel than most Staunton sets, and the pieces frequently have different-colored finials (decorative orbs and crosses that top the pieces), so the white queen can be crowned with a black orb and vice versa.

The knight’s shape, which has a bent, S-shaped neck and a downward-pointing face, is another distinguishing aspect of the design. The king’s crown in Dubrovnik is frequently capped with a simple orb rather than a cross, which is a difference from the Zagreb version. 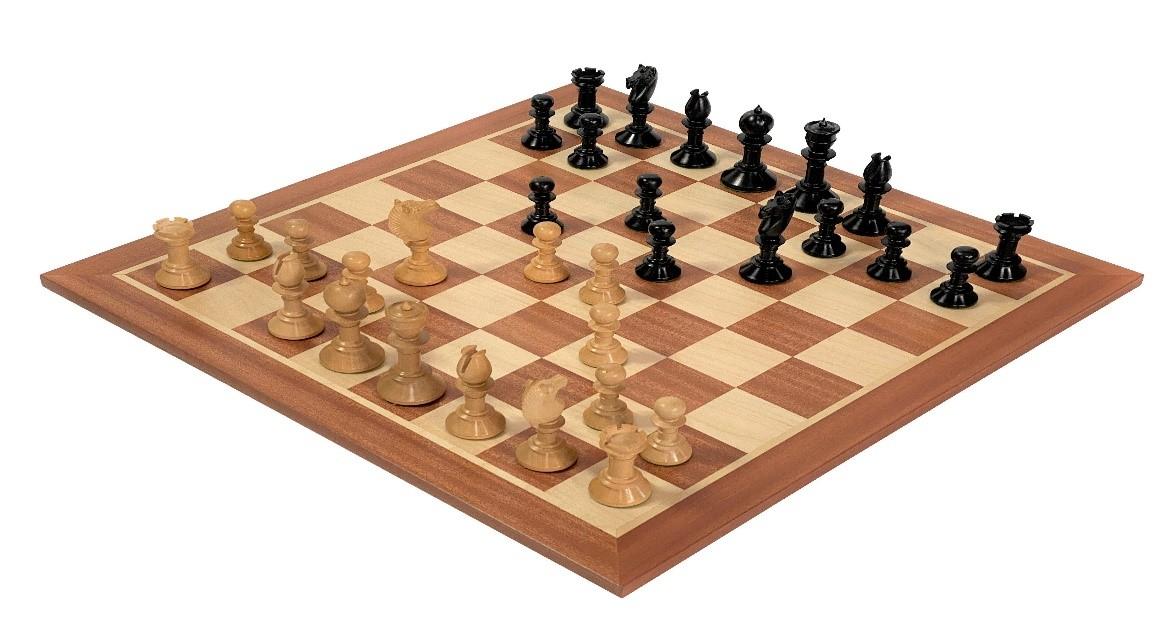 This classic style of pieces, sometimes known as Edinburgh Upright, was a forerunner to the Staunton design and was popular in the early to mid-nineteenth century, particularly among European aristocracy. The pieces are shaped like tall, slender columns with simple designs on top. The orb-headed queen has the appearance of a tall pawn, while the bishop’s split miter is typical of the pre-Staunton period.

Like many other sets of the time, the tall, thin pieces were prone to tilting during play, an issue that was not shared by the durable Staunton pieces that would eventually replace them. On the other hand, the Upright style is a distinctive and exquisite design in any chess enthusiast’s collection.

If we continue to talk about the luxurious chess sets, their story, and their description, that will go on and on. But, the above-mentioned ones are some of the most prominent and elegant chess sets. Many people have been asking about the luxury ones, and we have also got some queries about the chess sets for daily use. Today, we wrote about the luxury ones. Soon, we will get back to you about the “for everyday use” ones. Till then, keep up your chase for chess!