Fabiano Caruana: The Story of a Young Star 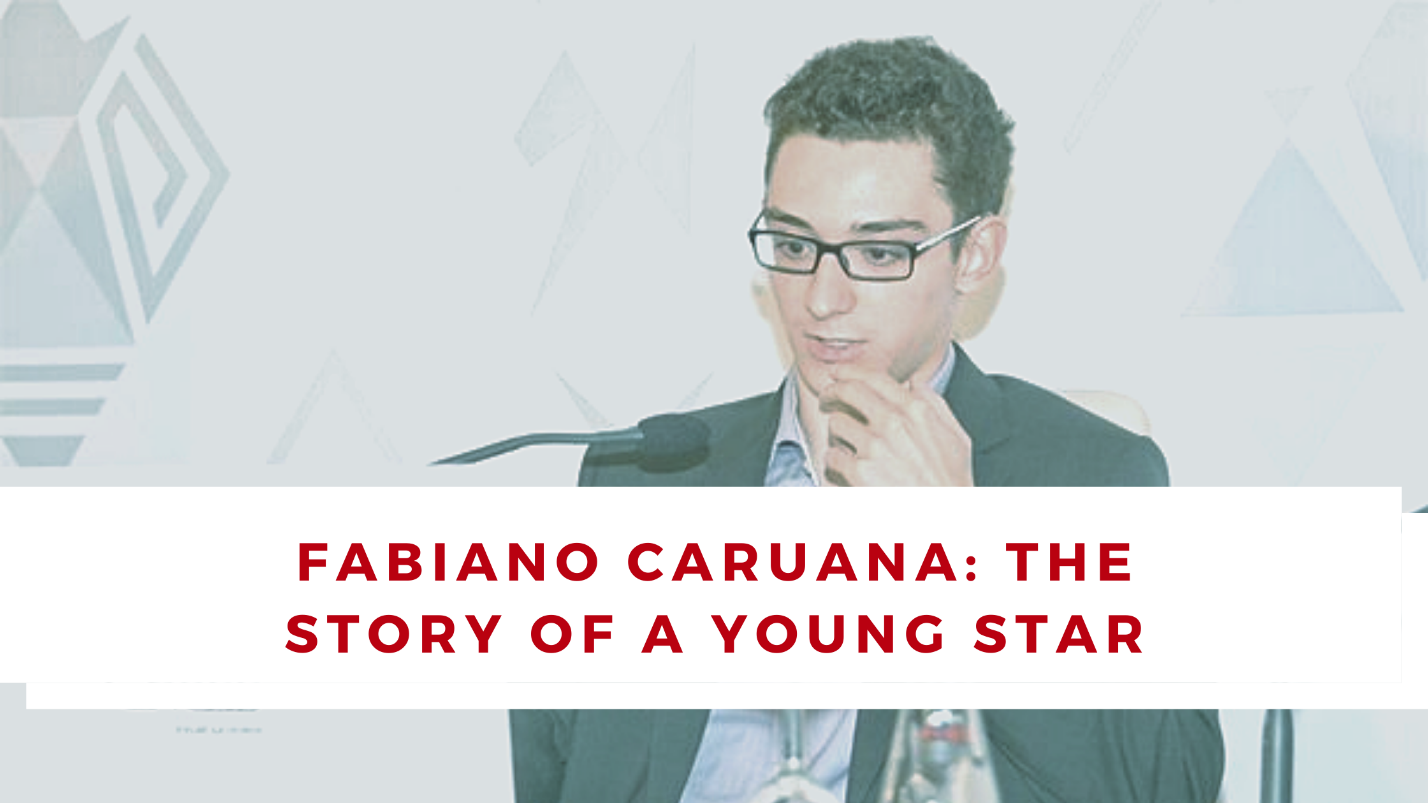 Fabiano Caruana: The Story of a Young Star

Fabiano Caruana, the genius who surpassed GM Hikaru Nakamura’s record for America’s youngest chess master, has ascended the chess mountain to the pinnacle.

This genius has achieved a world ranking of number two and has won multiple tournaments over his career. In 2018, the American lost in the tiebreak playoffs against GM Magnus Carlsen at the World Chess Championship in London.

Caruana was born in Miami, Florida, on July 30, 1992. When he came to New York at the age of five, an after-school chess program found his inherent talent for the game. National Master Bruce Pandolfini, a well-known chess author, was his first chess coach. GMs Miron Sher and Alexander Chernin eventually coached Caruana.

The Italian grandmaster began 2008 by winning the Tata Steel Group C division, which qualified him for the Group B event in 2009. In the same year, Caruana competed in his first Olympiad, representing Italy on the top board in the Dresden Olympiad. Caruana won the Italian Championship for the second time after a 7.5/11 finish, giving him back-to-back victories. With a rating of 2640, he concluded the year in the top-100 players in the world.

Caruana won the Tata Steel Group B in 2009 after defeating Nigel Short, an English grandmaster, in the final round. Caruana was selected to play in the 2009 World Cup in Khanty-Mansiysk after decent performances in the Russian Team Championship games and the Mitropa Cup. He defeated GMs Lazaro Bruzon, Lenier Dominguez, and Evgeny Alekseev before losing to Vugar Gashimov.

Caruana won the Italian Championships twice more in 2010 and 2011, his fourth and last time winning the event after missing the 2009 edition to participate in the FIDE World Cup. Caruana has rocketed up the world rankings by the end of 2011, reaching number 17 in the live rankings with a rating of well over 2700. 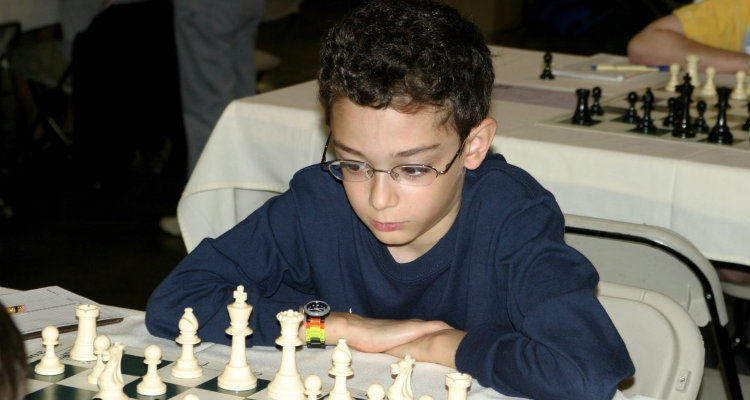 This time around, Caruana returned to the FIDE Grand Prix with a renewed sense of purpose after his remarkable performance at the Sinquefield Cup. During the first leg of the 2014 Tour de France in Baku, Azerbaijan, Caruana and Boris Gelfand were equal for the top spot.

Caruana finished the year in Tashkent in a tie for fourth place. Caruana, Nakamura, and Dmitry Jakovenko all tied for first place in Khanty-Mansisyk, the final leg of the FIDE Grand Prix in May 2015. Caruana qualified for the 2016 Candidates tournament with the victory, as he finished first in the 2014-2015 FIDE Grand Prix. 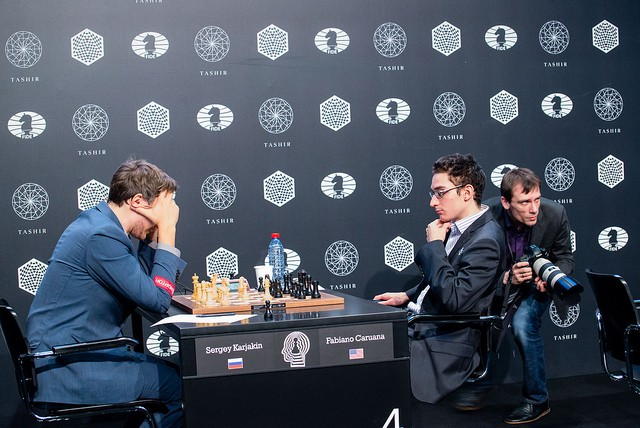 There were many world-class players in attendance at the 2016 Candidates tournament in Moscow, including Viswanathan Anand, Sergey Karjakin, Peter Svidler and Peter Nakamura as well as world-class players such as Veselin Topalov, Anish Giri, and Aronian. Caruana and Karjakin were both tied for the lead in the Candidates tournament heading into the last round, but Caruana needed to win to secure a World Chess Championship match against Carlsen. A draw against Karjakin would have given Karjakin an unfair advantage in the Candidates tiebreaker (most wins), thus Caruana had to play aggressively with the black pieces. In the end, Caruana was defeated by the Russian grandmaster and became the 2016 World Chess Championship Challenger.

Despite coming up short in the Candidates tournament, Caruana had a fantastic year in 2016. He went on to win his first U.S. Chess Championships and then returned to Baku to assist the United States win its first Olympic Gold Medal since 1976. On tiebreaks, the Americans beat the Ukrainians, and Caruana was awarded an individual bronze medal for his performance on the first board.

In the first year of the PRO Chess League, the American grandmaster played for the Montreal Chessbrahs. The Chessbrahs won the Atlantic Division with Caruana’s support, but the Saint Louis Arch Bishops knocked them out in the playoffs. When Caruana defeated Vladimir Kramnik in the first round of the 2017 Isle Of Man International, he came close to qualifying for the Candidates event by rating.

Both Caruana and So qualified for the Candidates tournament by rating when Kramnik was later declared as the 2018 Candidates wild card. Caruana won the London Chess Classic at the end of the year after defeating Ian Nepomniachtchi in a blitz tiebreak match.

Caruana finished third in the London Chess Classic a month later after defeating Aronian in the third-place match. Caruana finished third overall in the Grand Chess Tour as a result of his performance. Caruana competed for the Saint Louis Arch Bishops in the Atlantic Division in the 2019 PRO Chess League Season, leading the team to another appearance in the PRO Chess League Live Semi-Finals in San Francisco.

Caruana had a strong start to the New Year by winning his first Tata Steel Tournament. With a round to spare, he beat Carlsen, So, Anand, Firouzja, Giri, and other world-class players to win the event.

Because Caruana was the challenger in the 2018 cycle, he was automatically placed into the 2020 Candidates competition. As the tournament’s highest-rated player, he was considered a favorite going into it. The Candidates competition was postponed on March 26, 2020, because to Russia’s travel restrictions and the COVID-19 pandemic.

Caruana is on 3.5/7 at the halfway mark, one point behind Vachier-Lagrave and Nepomniachtchi. After defeating Dominguez 15-3 in the first round of the Clutch Chess Champions Clash in May 2020, Caruana advanced to the final. Caruana tied 9-9 in the final, but won on tiebreaks.

In the second part of the 2020-2021 Candidates competition, which began in April 2021, Caruana had a good 4/7 score. His 7.5/14 score was good enough to tie for third place with GM Anish Giri (fourth on tiebreaks), but not good enough to catch the winner, GM Ian Nepomniachtchi.

However, Fabiano Caruana is a recent time star of chess. People who love chess are waiting eagerly for the upcoming days and games of the young grandmaster.