How does the World Computer Chess Championship Work? 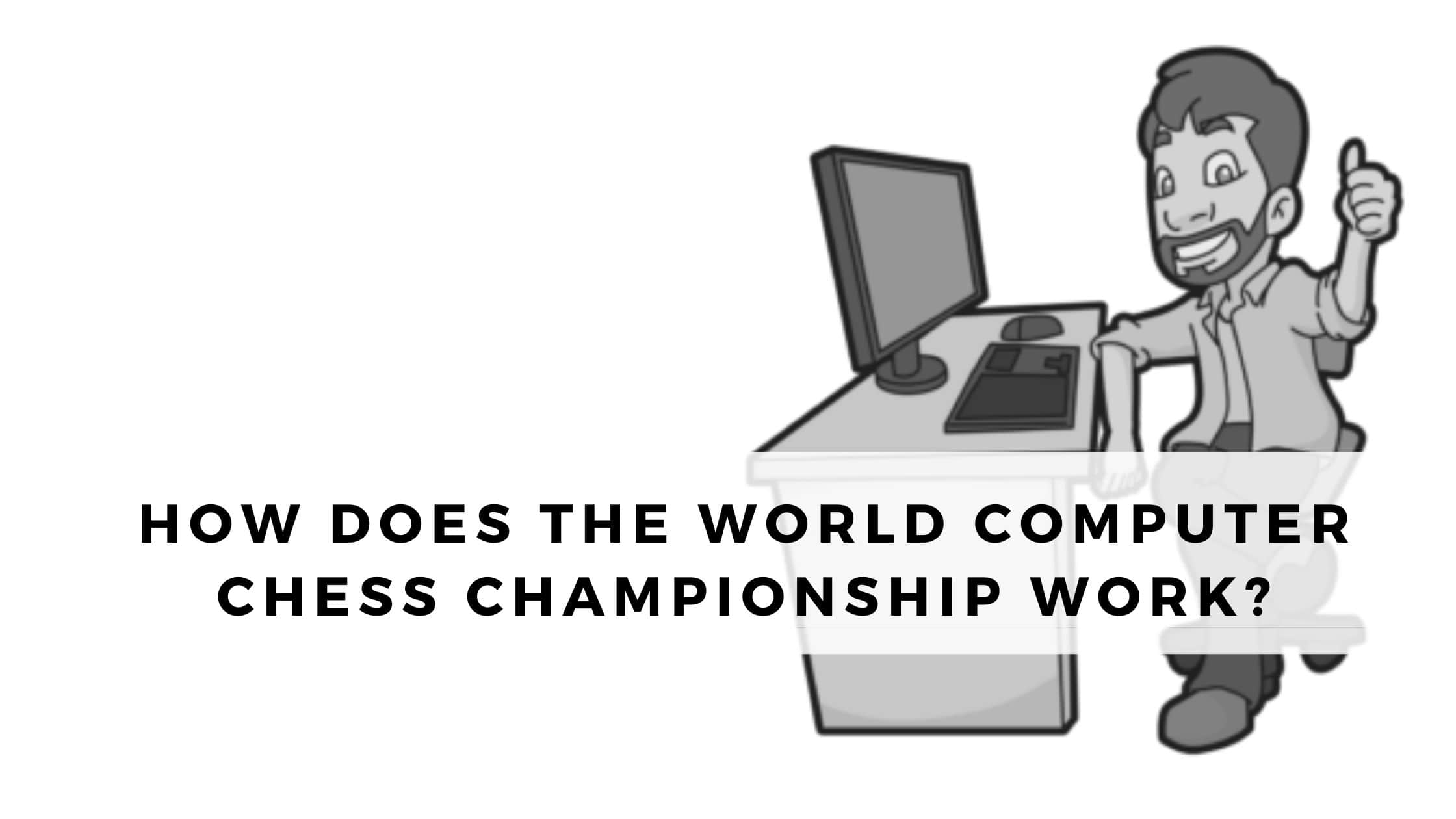 When you become familiar with the World of Chess, you will see that computers and software are a big part of it. They are used to train, practice, analyze games and solve endgames! So, what is the strongest computer in the world? And how is that determined? It turns out there are competitions reserved to computers only, including a World Championship!

So, How does the World Computer Chess Championship work? Several software (called chess engines) play against each other, typically in a multiple round robin format, divided into several stages. At the end of each stage only those at the top of the standing move onto the next stage, until the final is reached, where the two best engines play against each other in a super-final of about 100 games.

Chess computers and software are a truly fascinating part of modern chess. I am also really involved into software (my full time job is software developer!), so I am going to share with you more details about the chess engines, their world championship, how they are built, how to use them and a few other tips. Keep reading! 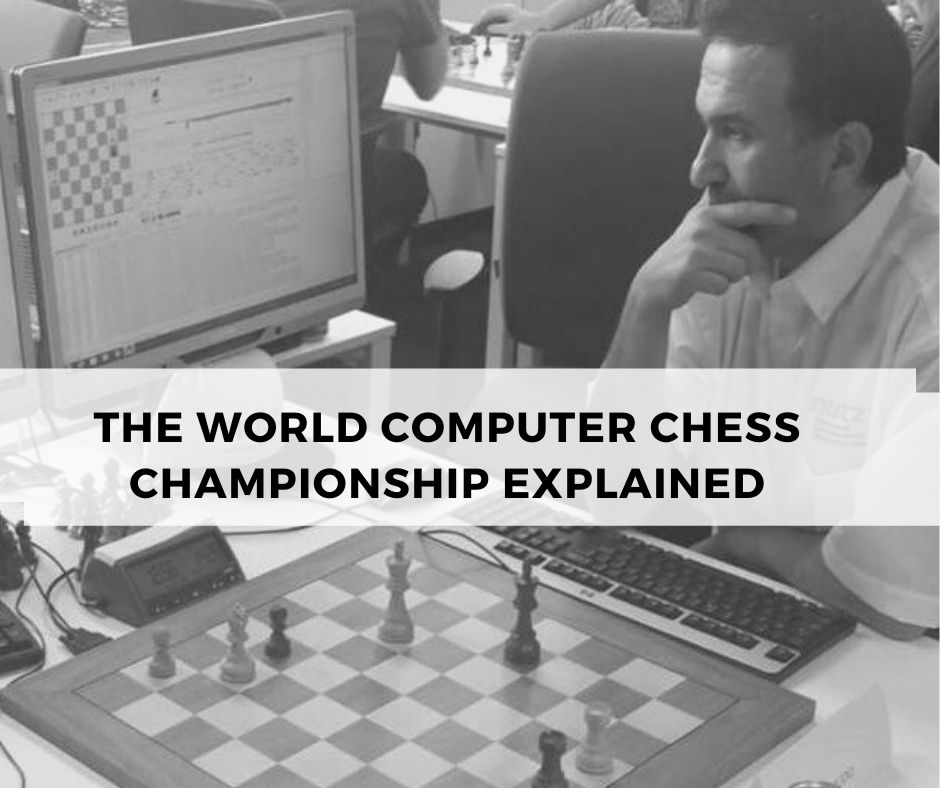 There is really a lot to say about this topic. But let me start with a warning note. Do NOT trust random sources that you find on the internet about it. Why? The reason is that Chess Computer is a business with quite some money at stack, so there is a bit of confusion. To give you an example, IBM has been involved in this game for long time.

Where does the confusion come from? From the competition itself! If you look for the “official” World Computer Chess Championship you might end up with the wrong information, because that is a competition between a small number of software, supported by companies. BUT, there is a lot of independent chess engines that have reached incredibly advanced level, and are by far the strongest ones today.

So, let me go straight to the point. Today, the REAL world computer chess championship is the TCEC (Top Chess Engine Championship). It’s an amazing competition (with somewhat complex rules), and has been running for several years now.

Before you start googling, here is the list of the recent winners of the TCEC; each season corresponds to a Championship, and is about 3-4 months long:

Believe it or not, some of the winners above do not participate to the “official” championship, which is in my opinion a very biased (and fake) competition. TCEC must be your reference (it definitely is mine!). To explain how TCEC works, I will borrow the description from their website.

TCEC (Top Chess Engine Championship) is a computer chess tournament[…].The goal is to provide the viewers with a live broadcast of long time control, quality chess – played strictly between computer chess engines created by different programmers. One Season is divided into several Stages and lasts about 3-4 months. The winner of the Season will be the TCEC Grand Champion.

TCEC is, in my opinion, a fair tournament where the truly best engines compete. Therefore, I consider it to be the World Computer Chess Championship.

How frequent is the World Computer Chess Championship? 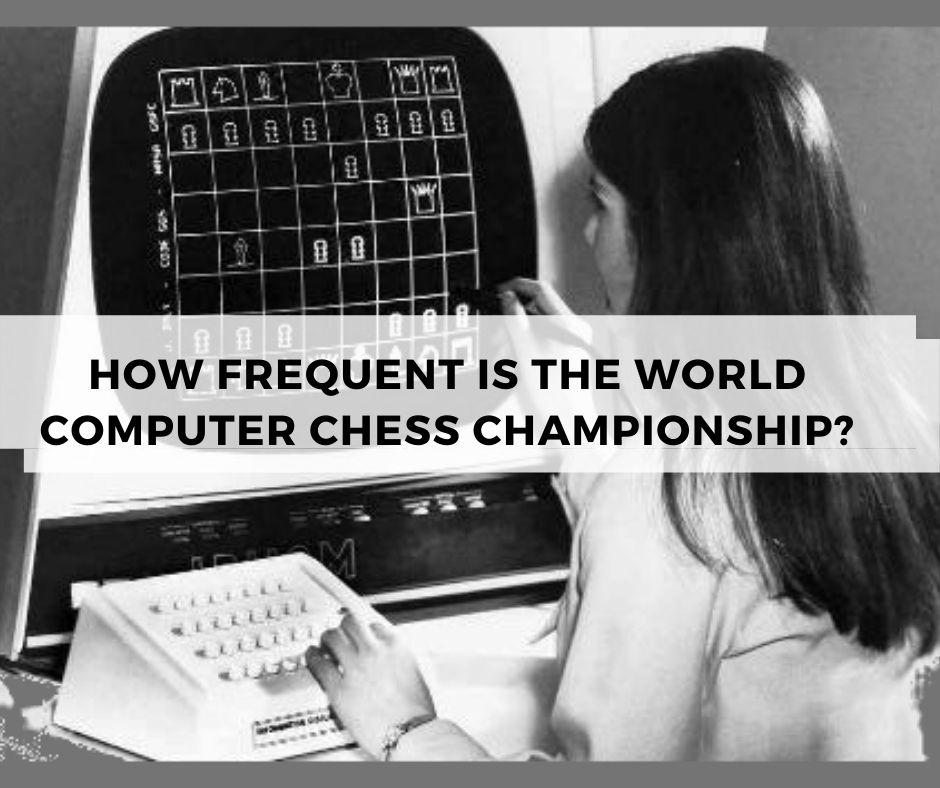 The World Computer Chess Championship works at a totally different pace than the human “classic” world championship. The reason for this is quite simple: computers can play 24/7 because they do not need to rest!

So, while the classic world chess championship is usually played every two years and is made by 12 games, TCEC is played more frequently, even more than once per year. As you read above, each TCEC’s season corresponds to a championship, and it takes approximately 3-4 months to complete. It consists of several stages, and after the last stage we have a Computer Chess World Champion!

To give you more details, TCEC started in December 2010 and has held 12 seasons until July 2018. Season 13 is currently running (September, 2018). So we can say that there have been 13 championships in 8 years. Here is a detailed table:

Season 3 was not completed due to hardware issue. In fact, that is the time when TCEC’s popularity exploded among chess and software fans. Learn about the first World Computer Chess Tournament here. 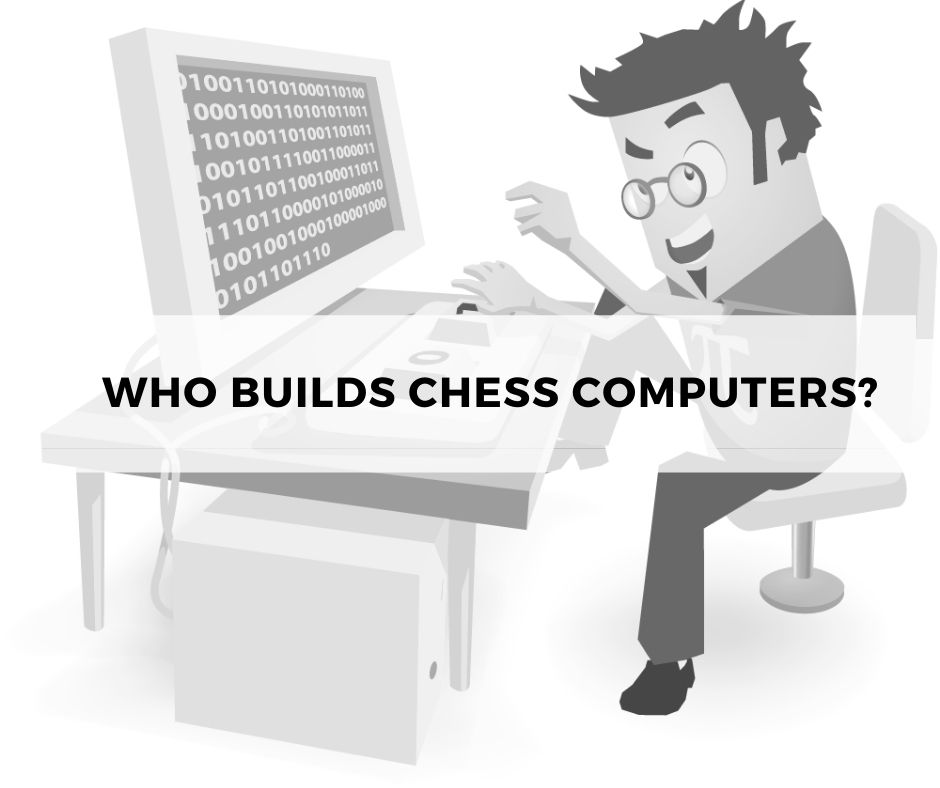 To start off, companies do. Or at the least they used to do. Deep Blue, probably the most famous chess computer of all time thanks to its matches against Garry Kasparov, was built by IBM. Deep Blue lost the first match against Garry, but then won the re-match!

I want to analyze with you three examples. These will be three very different, and therefore extremely interesting, examples. Furthermore, they are related to the 3 best chess engines in the world!

Let’s start with Houdini. This is the name of the chess computer built by Robert Houdart. The funny story is that Houdart built it while he was waiting for astronomy measures (that stuff can take several months). Initially, Houdini was free, but then became commercial and it still is as of today.

You probably already know Stockfish. It is developed by Marco Costalba, Joona Kiiski, Gary Linscott and Tord Romstad, but it has had many contributions from a community of open-source developers. So that’s the awesome thing: Stockfish is OPEN-SOURCE (and therefore free). The first version was released in November 2008, and since several years Stockfish has always been at the top of TCEC, winning it all many times, as you saw in the table above.

I also want to speak about Komodo. Komodo is a chess computer built by Don Dailey, Mark Lefler, and supported by chess author GM Larry Kaufman. Komodo is a commercial chess engine but recent versions (9 and more recent ones) are free for non-commercial use. It also won the TCEC in the past.

What is the strongest chess computer in the world? 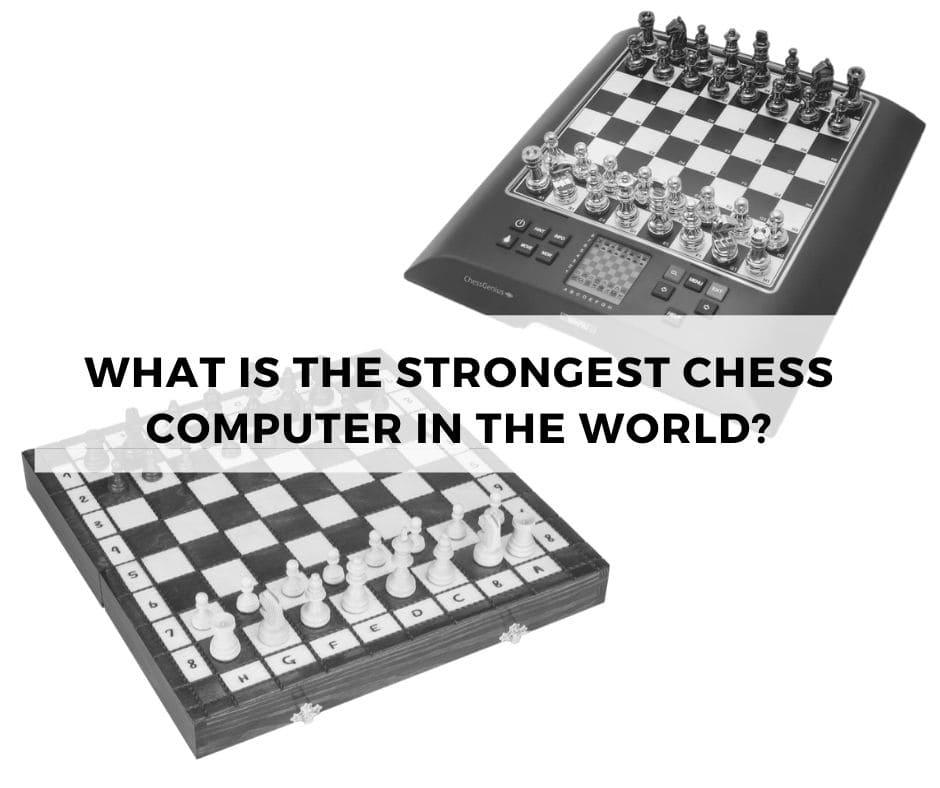 I can understand if you want to work with the best only. I also do. But in this specific case the question has no answer.

The problem is that the three chess computer I described in the previous section have very small differences. So small that nobody, not even GMs, can see them.

Sure, Stockfish has won the 2 most recent TCECs. And this means it has beaten Komodo and Houdini, if not in direct encounters then at the least in the tournament competition. Yet, whichever you have among these, it will just work fine. You won’t tell the difference, believe me!

Rumors among chess fans say that Houdini has a “attacking” style of play, whereas Komodo has more of a “romantic” style. I have personally seen a few of Komodo’s game where it sacrificed an exchange in impressive fashion and went on winning the game. Stockfish, on the other hand, is considered almost without a definite style — yet it has won many TCEC.

So, to sum up, my answer to this question is: None of them. Stockfish, Komodo and Houdini have such a tiny difference in strength that nobody can tell.

How much does the World Computer Chess Champion cost? 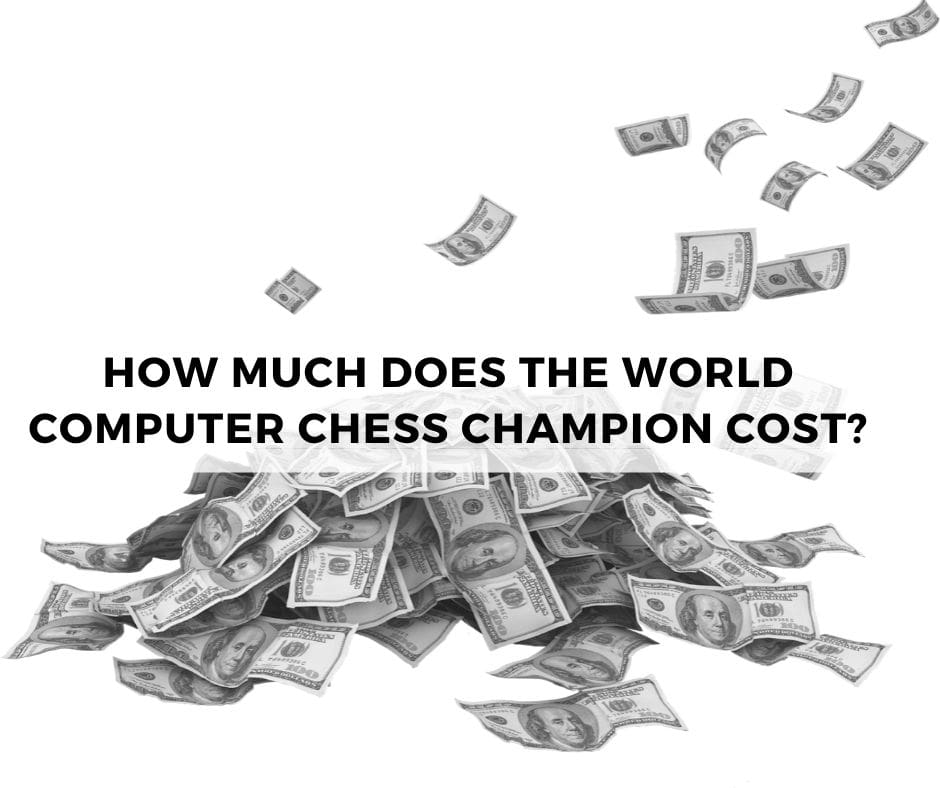 Zero! At the time of writing, the World Computer Chess Champion (via TCEC) is Stockfish, and it is a free and open source software. You can simply download it for free from their website.

However, after you do that, you will need some additional software to run the chess engine. And also a chess database. There exist software that let you use both database and the engine in an extremely easy way. And, if I had to give you a suggestion, I would definitely tell you — go for it.

There are several options among these specialized software. The most famous, easiest to use, and probably reliable, is ChessBase. You can purchase the standalone software, but now they also have the online application, that is available just for $5/month. This is in my opinion a very reasonable price. And you will get a whole bunch of features, including as I said database and engine analysis. Just to be clear, I am NOT affiliated with ChessBase by any means.

If you like open software, and/or do not want to spend a penny, then there are several free alternatives. I can easily mention 3 of them: SciD, ChessX and Scidb. All of them are free and open source. However, you will need to be at the least familiar with installation of programs and a few computer hacks. Furthermore, ChessX only works in Mac computer, whereas Scidb only in Linux computer. To tell you the truth, I really like these software, have tested all three, and I am active Scidb’s user. Still, I think that ChessBase is a more comfortable option.

For the sake of completeness, the other top engine, Houdini and Komodo, currently are priced at $59.

In this post, I tried to explain to you how the world computer chess championship works. This is a very close subject to me, because I am really involved into software and have also worked in artificial intelligence (I am a software developer with a PhD in optimization). There’s some confusion around about this topic, but I hope you know have clearer ideas!

I just want to mention some additional resources: