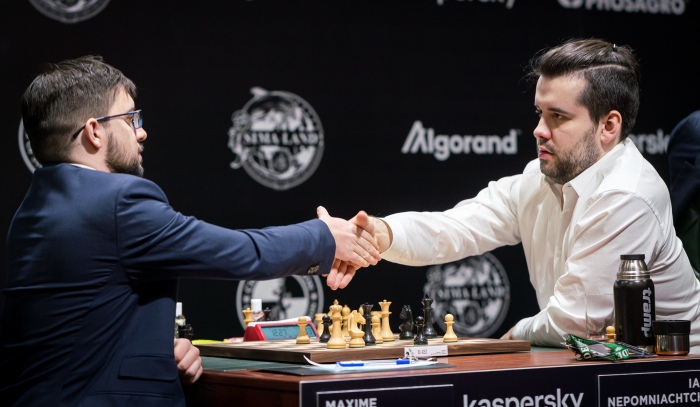 The eight-player tournament aims at determining who will challenge the defender Magnus Carlsen for the title of the World Chess Champion. Holding the highest ever prize fund in the history of the Candidates tournament, this year’s event awards a prize fund of half a million euros for the winner. Not too shabby of a prize, right?

By now, chess enthusiasts all around the world are already used to witness an almost invariable set of openings at the most prestigious elite chess events.

Oftentimes, particularly in the Candidates Tournaments and in the World Championship matches, defences for the black pieces such as the Berlin defense, the famous Sicilian Najdorf, or the Petroff defense, are intensely prepared by the strongest chess teams, working on the back-end for the main protagonists – the super Grandmasters. More infrequently though, we do see these players using secondary modern openings such as the Caro-Kann defense or the Scandinavian defense, to name a few.

However, the round seven of the FIDE Candidates 2020 would not have been such a blast if it were not for Ian Nepomniachtchi employing the rather rarely seen French Defense as a two-time surprise weapon, this time against Maxime Vachier Lagrave – the number 1 rated player in France.

Some would say this time irony got the best the highest rated Russian Grandmaster, the great Ian Nepomniachtchi! He lost badly! Upon completion of round seven, both players are now tied for the lead with four and a half points each, with a group of four players a full point behind them. Therefore, the race is now wide open again as at least six players have a chance for the first place.

Interestingly enough, the Frenchman would not have played this tournament if it were not for the withdrawal of Radjabov on March 6th. Having asked FIDE to postpone the event due to the pandemic outbreak, Radjabov received an answer from FIDE stating that the postponement of the event could not be legally and practically conducted, as the tournament could solely be postponed by order of the Russian authorities.

FIDE also stated that it is not the responsibility of the international Federation to cancel FIDE-rated tournaments in any given national chess federation. Therefore, apart from health and safety measures such as making handshakes optional and screening for body temperature, not much was done by the federation. However, they did state that if any of the eight players would test positive for COVID-19, the tournament would be stopped immediately and resumed later this year, resuming the old crosstable.

Yet on March 26th, following the announcement from the Russian government grounding air traffic with foreign countries, FIDE suspended the tournament as the organization could no longer make sure both players and officials could return to their home countries upon completion of the tournament. As a consequence, Radjabov called for his reinstatement in the tournament, with legal action in mind if his request got rejected.

Fortunately for us chess fans, that meant we could witness the genius of the Frenchman against Ian. Often referred to as Nepo, Ian happens to hold a 4-1-6 record against the world champion Magnus Carlsen in classical games – the best score any chess player has had against Magnus in classical games comprising 4 wins, 6 draws and 1 loss. The champion, however, got the best of the Russian Grandmaster in both rapid and blitz games.

Nonetheless, prior to the adjournment of the FIDE Candidates 2020 due to the coronavirus pandemic, Ian Nepomniachtchi seemed untouchable until the clash with the French super Grandmaster in round seven, thus improving Maxime Vachier Lagrave’s changes of facing Magnus for the title.

With a clear, full point advantage over his opponent, Ian chose the French Winawer, perhaps filled with confidence due to his run up until that moment. Nevertheless, Nepo was fully aware that his record against Maxime Vachier Lagrave was not exactly the best. At 5-7-1, Maxime’s five victories and sole loss versus Nepo made him the favourite with the white pieces. Perhaps this being the reason why Nepo tried to surprise Maxime by playing a defense that is not commonly seen amongst the chess elite.

In hindsight, however, Nepo’s choice to play the French against the Frenchman may have been risky. And while luck does favor the brave, it is not always the case. For starters, it did not come as a surprise anymore since he had played it earlier in the tournament against the 22-year-old Russian Grandmaster Kirill Alekseenko, in round three. As India’s number 2 Grandmaster Vidit Gujrathi put it on the Chess.com broadcast, “I thought it was a one-game idea against Alekseenko”. Maxime Vachier Lagrave, however, did not seem surprised as later shown in his post-game commentary.

But you may be wondering, why was the choice considered risky? Well, the reason why the Winawer is not the most popular chess variation among the world chess elite is due to its strategic risks, almost requiring a top engine to counter white’s ideas on board.

Contrary to Alekseenko, Maxime Vachier Lagrave and his team approached the variation with the push of the h-pawn to h5 - a more concise response as it allowed the white pieces to maintain board flexibility with the potential to play on both sides. Then we reach the critical moment on move 18, when Nepo decided to close the centre with the c5-c4 pawn push - an important decision which has to be made in the right time, otherwise black will not have a whale of a time due to its lack of play, not on one, but on both sides of the board.

Maxime did not let the mistake slide by as he put in place an active plan on the queenside, repositioning his dark squared bishop and taking advantage of the misplaced kingside rook of Nepo. He then foiled Ian’s attempts to bring the King towards the queenside, freeing up his rook, by launching an attack in both the centre and the kingside. In just two moves after reaching the time control, Nepo finally signed his capitulation.

We will solely go through the main moments in this blog post, although you can find the entire game and commentary at lichess.org by following the URL’s below.

Here it is, the famous French Winawer!

In Magnus Carlsen’s words: “Usually in chess it is only logical to push h5 after you play h4”. And it does, indeed, make sense considering that black only has two pieces on the kingside, which are mitigated by white’s space advantage, along with its quick kingside development.

At move 10, in a theoretical position, we have equality on the board after 10.Qg4. However, Nepo’s 10… Rg8 seems intriguing. Unless he had not got to the conclusion that in case of 11.Bb5+, black would have to go 10… Kf8, it seems odd that Rg8 was played.

Finally, we arrive at the first big strategic mistake by the great Russian Grandmaster Ian Nepomniachtchi. At move 18, after 18. Ne2, the position is considered equal with chances for both players. However, Nepo played c5-c4 – an early decision.

But why was this move considered such a mistake? Well, it presents a lot of problems for black. Even though pushing c5-c4 in the French is common, in this particular position it made little sense. By closing the centre with this much material on board, specially the white rook on b1, black is begging for a pawn avalanche on the kingside if white is able to cease all attacks on the queenside.

The right plan was therefore to trade rooks, only allow the white castling at the cost of the a-pawn, close the centre and then bring the king to the queenside where it would be safe.

This would have provided black with a plan to reach equality, which did not happen in the game due to white’s dual play on both sides of the board. An example of this idea would be

As the Frenchman put it, “I don’t think this was the right plan. Closing the center makes sense, but I do not think he is in time” (Vachier-Lagrave).

In this position, Ian made a move that got many intrigued with his game plan. And that move was 20…Rh8?. However, to be fair, it would have taken an almost machine-like precision to be able to pull the creative idea of 20…Ra6, with the idea of offering a queen exchange. If declined, the plan would be to retreat the queen to c6, both keeping an eye on the queenside and supporting the e6 pawn for the famous …f6 move, which would allow black to grab some centre control by recapturing with the knight and then posting it on e4 – supported by the d5 pawn.

An example of such gameplan would be

We arrive to another very interesting moment of the game:

With the move 22.Rb4!, white is able to creatively close the position from the centre to the queenside, thus eliminating any black’s chance of counterplay on the queenside – the best predecessor for the so-long awaited kingside pawn avalanche.

Struck by surprise, Nepo realised he only had one move after 23.f4 was played – and that was to retreat his knight to the same square it was previously, just one move before. Capturing the rook on b4 was not possible due to a predictable f5 in 2 moves, melting down black’s position for good.

A good example would be

The last critical moment of the came when Maxime Vachier Lagrave cleverly exchanged his powerful dark-coloured bishop for black’s night on e7 in order to launch an attack with g4-f5 and penetrate Ian’s position. It was too late by then.

Also, it is worth noting the simple yet beautiful move 36. Ng3!. The knight on g3 covers both e4 and f5 and once …Qd2+ is played, there is nothing else black can do. The game ended a few moves later, 2 upon reaching the 40-move time control. Here is how it ended

I had to be ready for it. 1…e6 was definitely an option because very often in the Candidates, when someone plays an opening, he plays it for the whole tournament.

So maybe here’s a lesson for all the competitors out there!

He then credited his good shape due to his rest saying “I think it’s mostly because I got a big break. And, of course, even though I didn’t have much time, I did prepare more carefully for the Candidates once I knew I was in and with the help of my team. What helps is that my team is doing a great job so far. I more or less caught up with everyone in terms of openings despite having very little time. Then I got good positions, and I think it helps when you have good positions and you’re in good shape.”

Humbly enough, Maxime also said that he was satisfied with how the tournament was going for him as he was playing “reasonably well”, apart from the game played against Chinese player Wang Hao. Let’s see how the players perform after a big break due to the COVID-19 pandemic. Maybe for some players like Ding Liren, one of the favourites (if not the favourite next to Ian Nepo) to win the Candidates prior to 17th March, the pandemic may reveal itself a bless in disguise as they will come fresh with no health issues interfering with their preparation for the world championship.