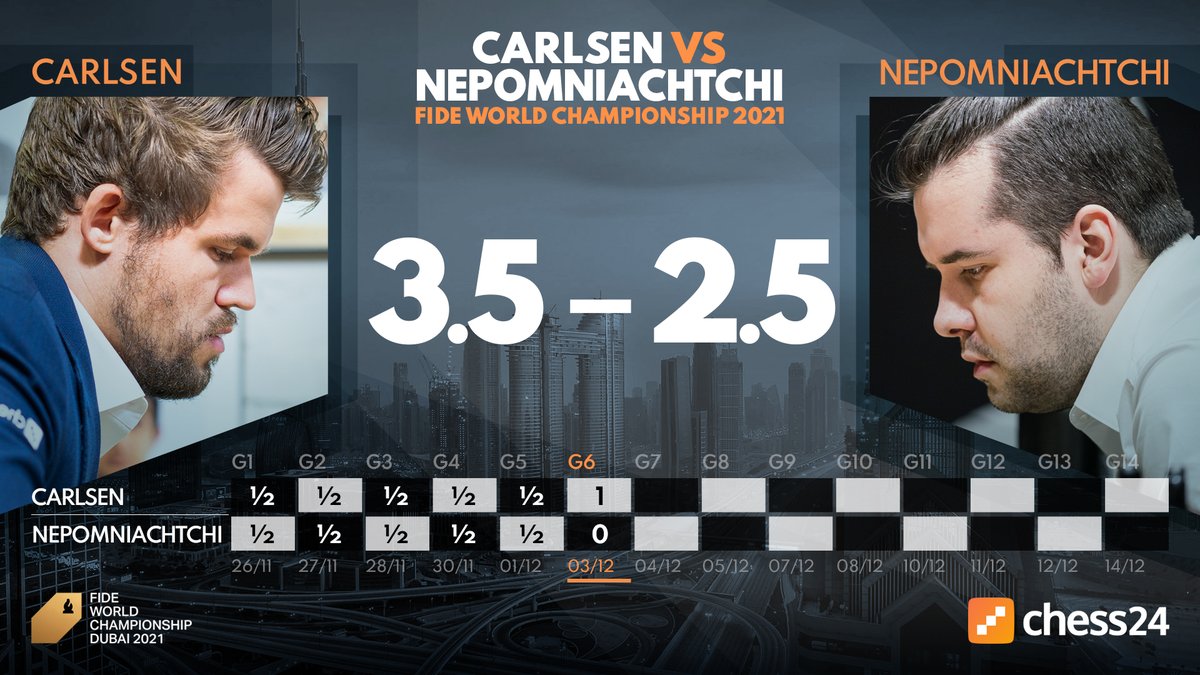 Today we are going to review Game six. This is going to be a very challenging task as this game is long and full of ideas!. This is the first decisive game in the world championship match and a masterpiece of endgame play from Carlsen. Let’s dive into it!

The game started with Carlsen playing white and Nepomniachtchi playing black. White opened the game with 1-d4 aiming for a more closed and rich position the game proceeded as follow 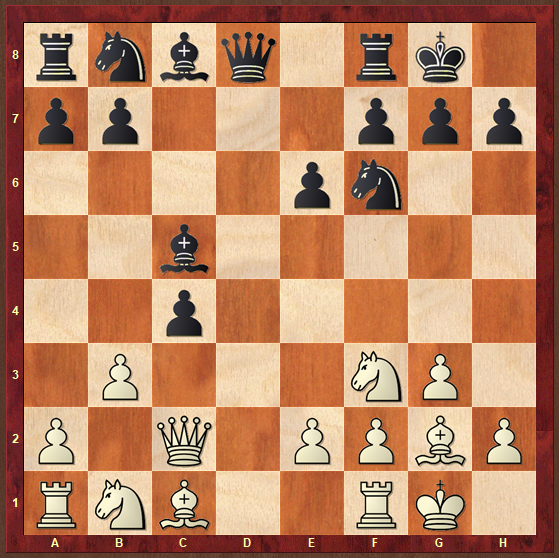 9-..Qe7 10-Nbd2!? A fine pawn sacrifice that wasn’t played before according to my chessbase mega 2020. White would get a lot of compensation for the pawn sacrificed in the spirit of the Benko gambit style without any counter play from black side. White is also ahead in development and the pressure on b7 would be unbearable . that is why Nepomniachtchi chose to ignore this sacrifice and played a development move . 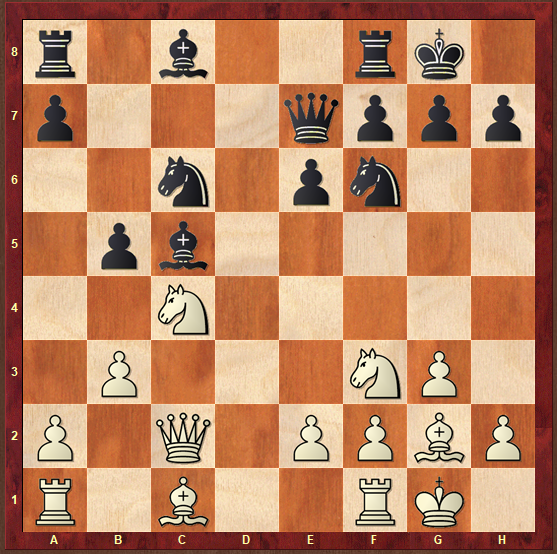 The engine might say it is the best move but we are going to head back to the basic chess strategy. We all learnt not to provoke weakness in the side of the board you are weaker. In this position white has so many pieces looking at the queenside and it can prove to be dangerous!

12-Nce5 Nb4 13-Qb2 Bb7 14-a3 Nc6 15-Nd3 Bb6 16-Bg5 very natural play from white. All Carlsen pieces are now in the game and he has no weaknesses. He also have good control over e5 square and open d and c files. Most likely white should put the rooks on open files and try to create some pressure over the queenside.

16- .. Rfd8 17-Bxf6!? A commiting move. White gives up the bishop pair to destroy black structure. Black also chose to keep the the queens on board with simply 17-…gxf6 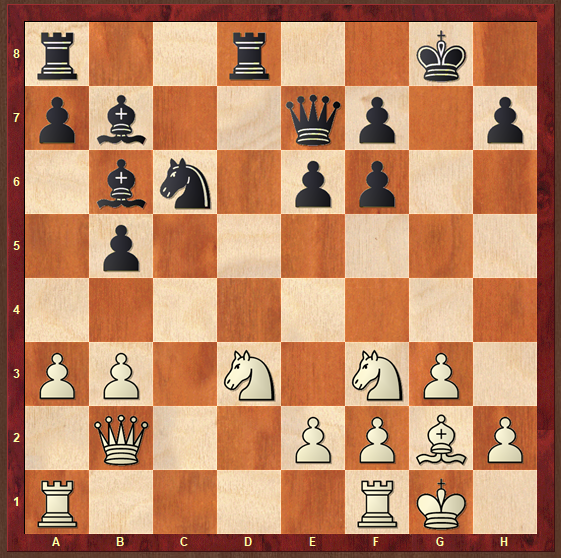 18-Rac1 Nd4 19-Nxd4 Bxd4 Exchanging is in white favor very slightly. Now white has a chance to immediately exchange the light square bishops . taking a way one advantage from black and heading for an endgame with slightly better structure .

25-…Rac8?! That is a dangerous decision. Materially speaking, white will lose queen for two rooks so he will lose 9 points for 10 points which means it is like giving up a pawn for black. GM Ian doesn’t wanna a draw.However, this would lead to totally unbalanced game without any clear outcome. 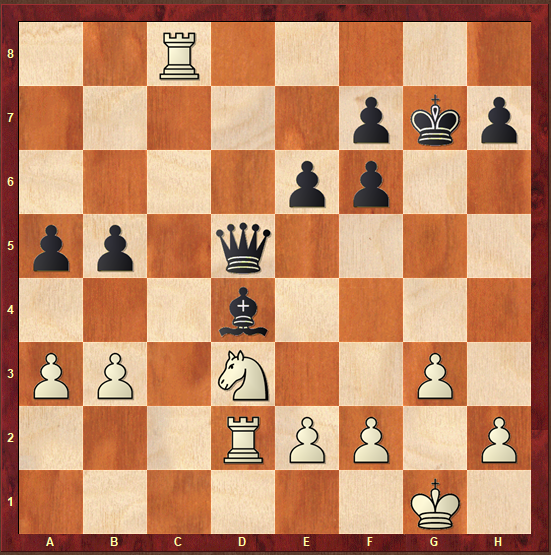 28-b4- a4!? Black believes in his position so much. He wants to keep all pawns on the board to keep his winning potential. However, white is more than fine here and it will be shown on the next moves!

29-e3 Be5? Missed a tactical opportunity of Bb2! This move would have been a disaster for Carlsen .it is very hard to keep the pawn on a3 now an example of a variation would be (30-Rc5!? Qd6 31-Rxb5 Bxa3 with a very dangerous position for white. We all know that the a and h pawns are the worst for a knight and here it would be difficult for white to defend. ) 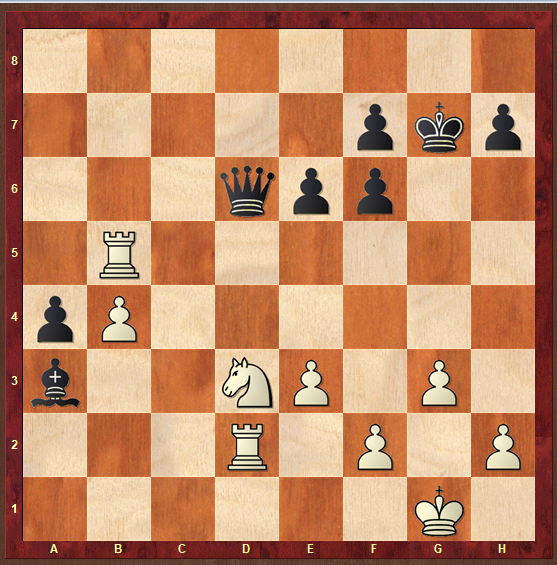 Luckly for carlsen ,Ian missed this chance to make life hard for him, after blacks move 29-..Be5? 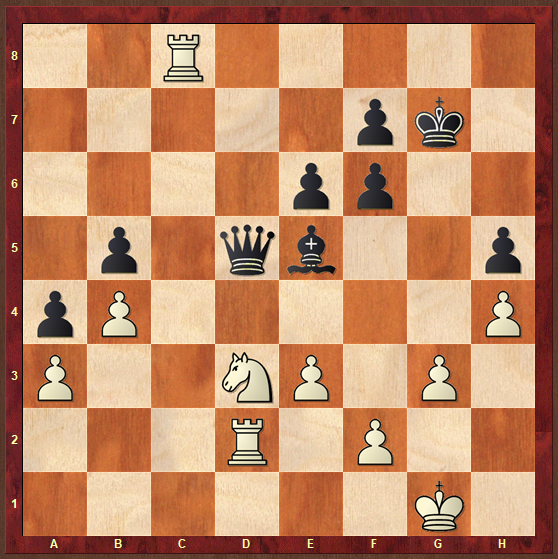 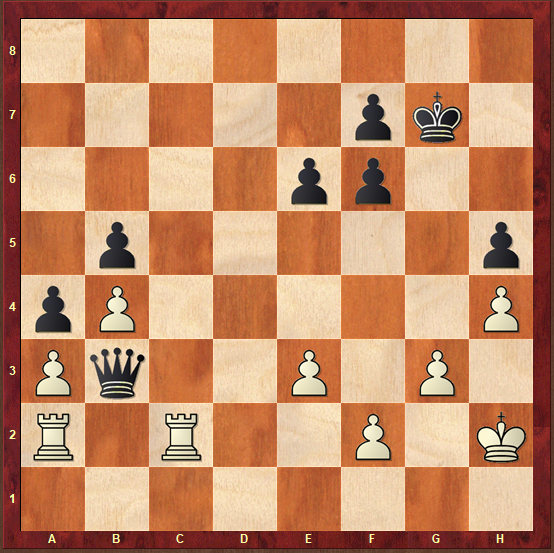 However, in time trouble the game continued as the following after the 33-Rd1

39-Nc5 Qxb4 40.Nxe4?! well it is the 40th move which is the peak of time trouble before white gets extra time on his clock. It is understandable that white goes for the simplifications however 40-Rdc2 puts the queen and bishop in terrible situation for example (40-..f5!? 41-Nxa4! Qxa4 42-Rc3 then there is no way for black to play for a win anymore. In fact he must be careful not to lose this position due to his bad pawn structure ). 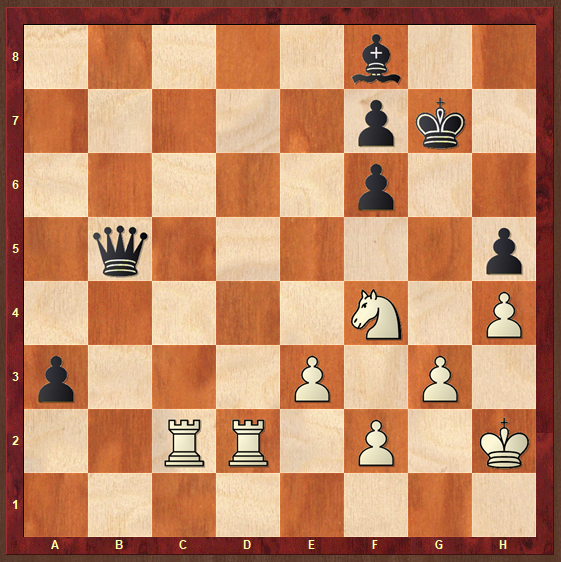 46-..Kh6 47-Rd1 Qa4 48 Rda1 Bd6 49-Kg1. The plan is extremely simple. White will move the king back and forth no progress can be done. Exchanging bishop for knight results in black losing his key pawn on a3 that keeps his drawing chances. Ian should have offered a draw here! 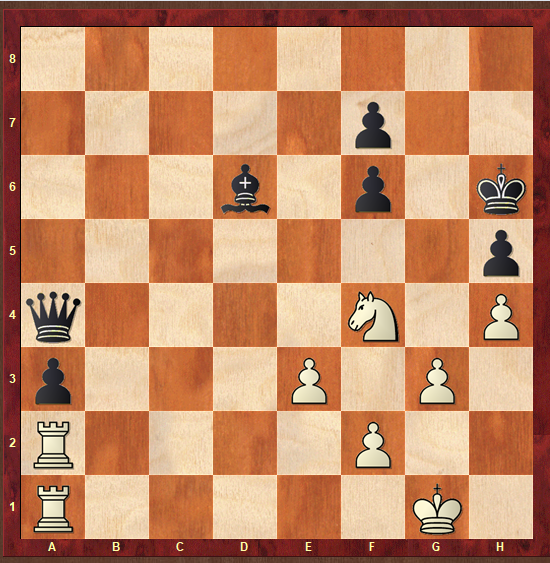 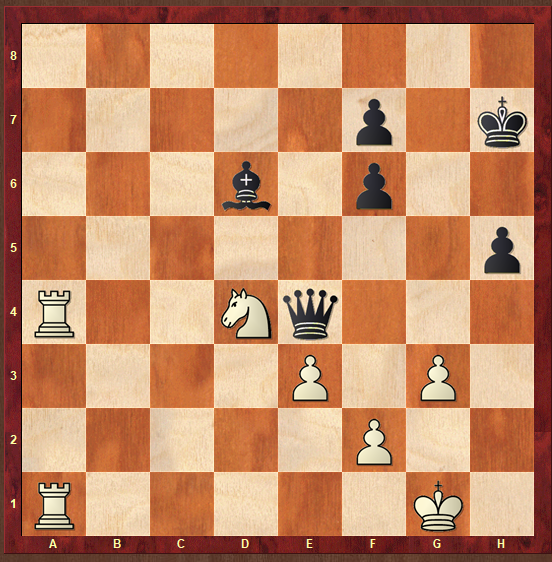 White achieved a great progress getting rid of the passed a pawn without even losing exchange. The remaining pawns are all on the same side of the board. White is the only one playing for win here. This is true due to the fact that white has a better pawn structure and black has his 3 pawns isolated, doubled and weak. The next moves will show why Carlsen is the best player in the world . 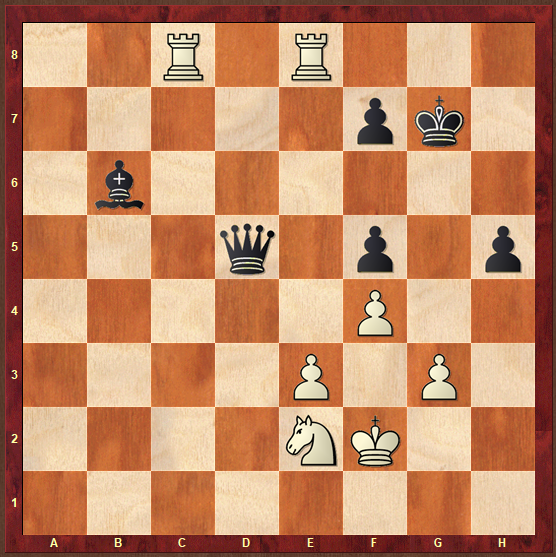 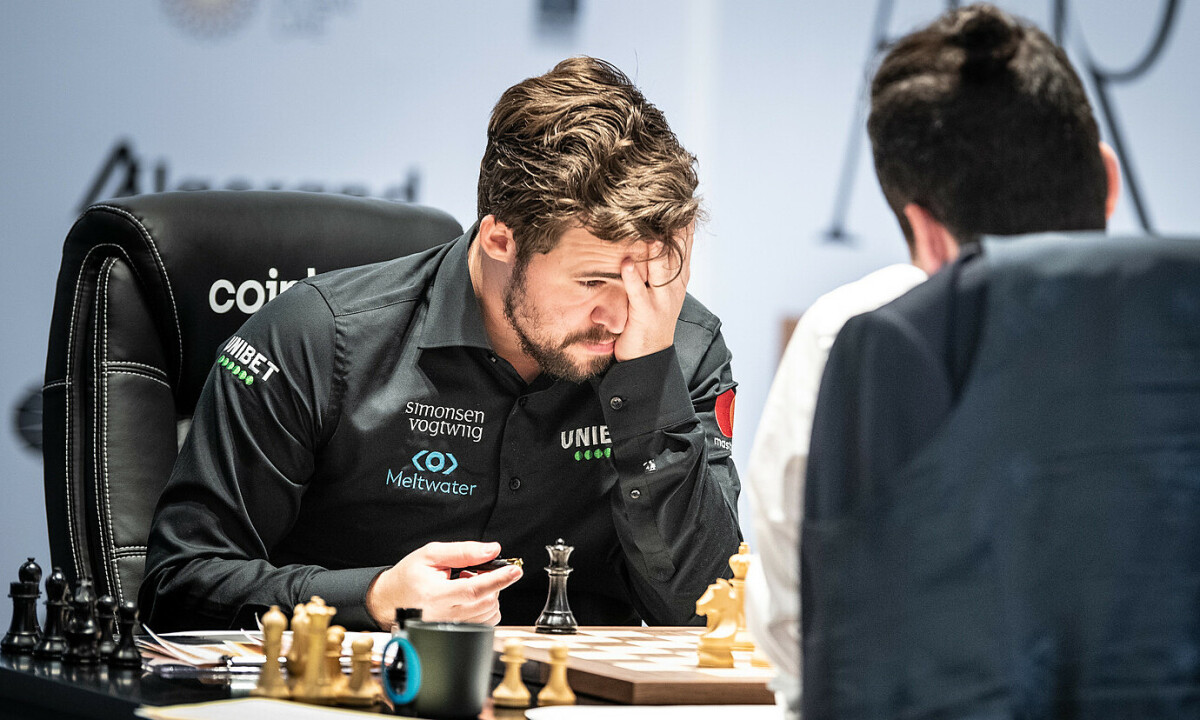 Carlsen realized there is no progress that can be done with this dark square bishop pressuring his kingside so he goes for this tactical trick !

In this position white made huge progress as he got rid of all black potentials and he has 3 pawns against 1 and 2 passed pawns. This position is hopeless for black because the knight is a great defender and it will be so hard to find some sort of perpetual checks. You can check in the link below how did carlsen convert this great position into a full point. 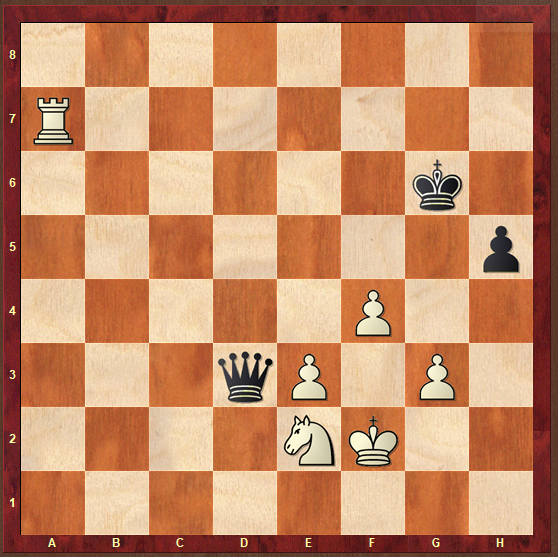 Here is the full game:

GM Ian wont just give up the world championship by losing one game. We are sure that he will go all in in the next rounds to have a chance to be a world champion! Carlsen showed here an outstanding technique .However ,we are sure Ian has his own deep preparations that he would have to use now in order to equalize the score.

After 6 rounds of chess and 5 draws we get a one decisive result.We look forward to the next games and we are sure they are going to be exciting and full of aggressive chess!