How To Choose a Chess Opening Repertoire 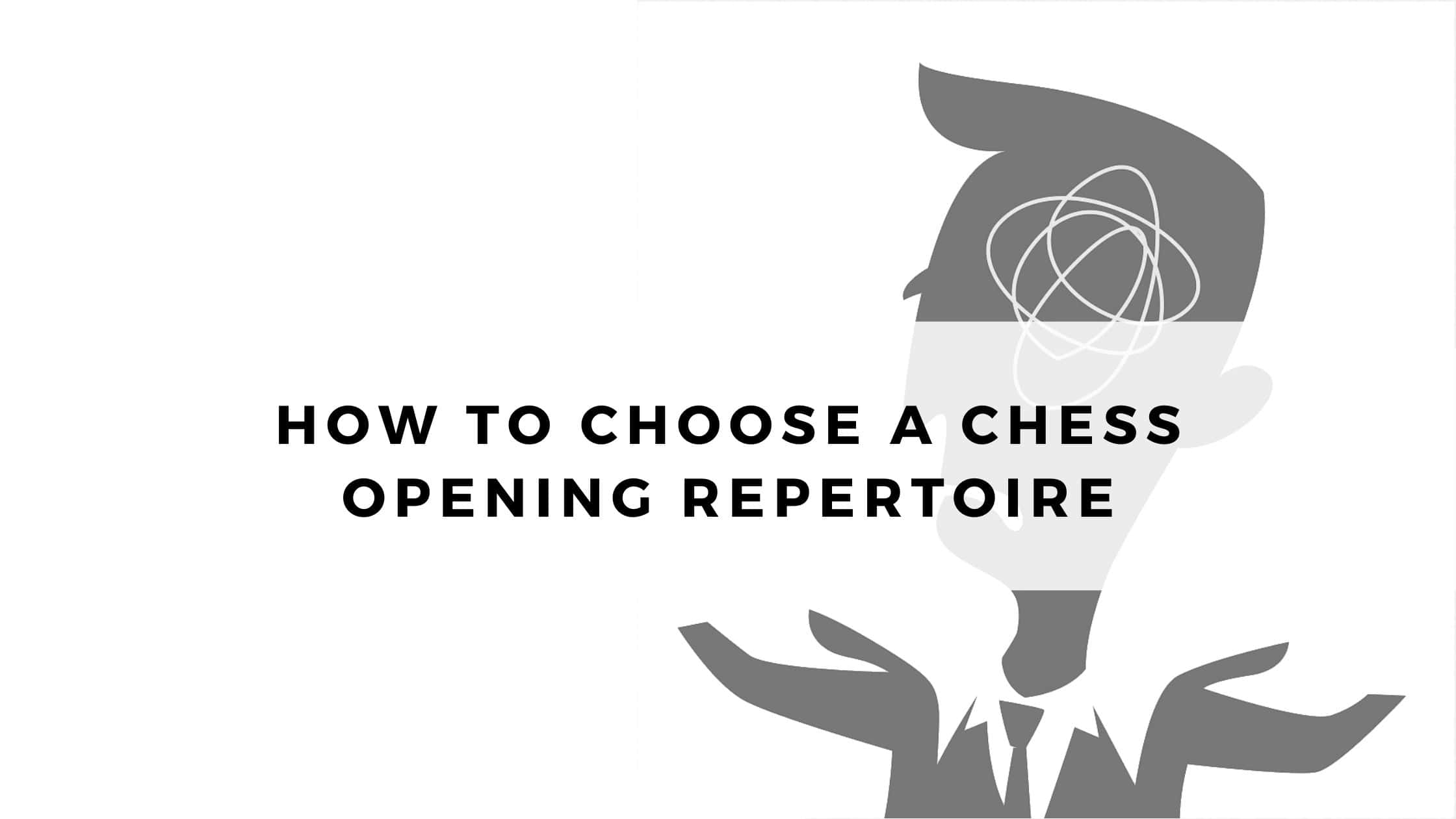 In this post I will touch on a lively discussed subject, again regarding opening preparation. Every chess player, before going deep into studying some opening line, asks himself the question: Which chess openings should I include in my own repertoire?

After reading this article you will have a clear idea about the important guidelines that help you choosing the repertoire that is the best for you.

This decision is indeed very important. Once you decide on a few openings, those will be the focus of your studies for quite some time. Your entire personal database will be built after them, and also the type of middle-game position that you are going to specialize on will be based on these openings.

Of course, you will have time to change or update your repertoire. Actually, you should really do it after, let’s say, 1-2 years. The reason is that changing repertoire after a while will broaden your chess knowledge: exploring and studying in depth different openings gives you a different point of view.

Let’s now put ourselves in the shoes of someone who has to start today building his repertoire. This is the general plan I recommend:

Now, I understand the points above can seem quite confusing. Keep following my thoughts and everything will appear clearer!

What openings should be considered? 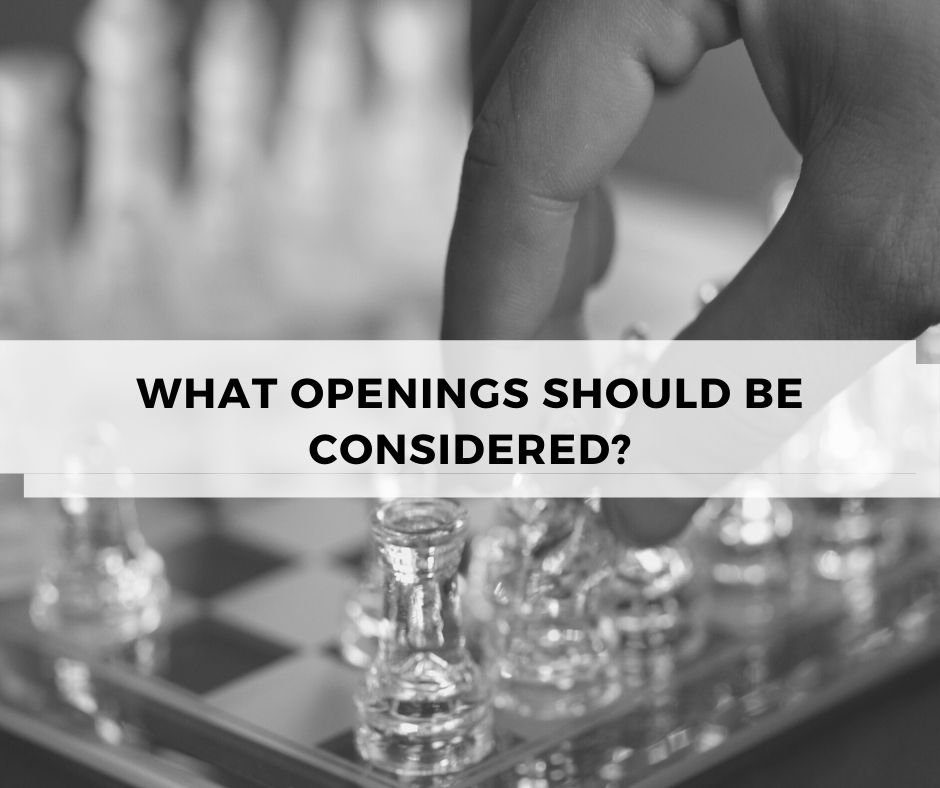 Depending on how much “in” the chess world you are, you may be already familiar with many openings. This is good, but forget about sub-sub-variations for the moment. We want to decide on which main lines to include in our repertoire.

Keep in mind that generally speaking 1. c4 demands a more theoretical approach than 1. Nf3, in terms of memorization. Therefore if all you are trying to do is to “skip” theory, put only the latter on the list and forget about the English Opening for the moment.

There are of course other choices, and feel free to put them on the list. For example 1. f4 is a reasonable choice.

Now, let’s consider the case of a Opening Repertoire for Black.

At this point, with your (quite long) list, we are ready to go onto the next step.

Choose the right openings for you 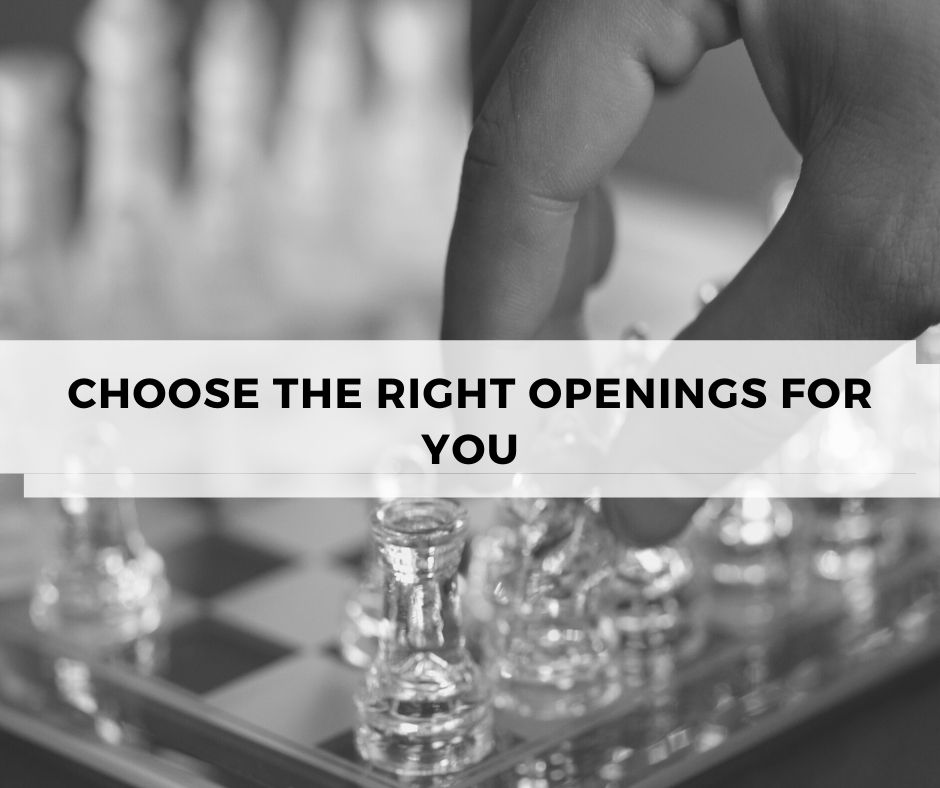 How do you orient yourself between all the options that you have listed in the previous step? My suggestion is to follow a very practical and rational approach.

Even though you can potentially become a expert in every opening scheme, there are certain openings that fits your talent better. It’s like if you have a special touch for those kind of positions, for apparently unknown reasons. Simply put, you feel those positions better.

So if you are at your first opening repertoire, your should specialize in exactly those positions, and their related openings. It’s to improve in a subset of openings, until becoming really good at playing them, rather than changing often opening choice (and not being good at any of them).

Now the question is: how do you understand what these “special” openings are? In my opinion you should simply rely on statistics.

If you have already played some over-the-board game, possibly with long time control, go through them and just mark what games were the best (from performance point of view), and in which ones you felt the position like if it was your second nature: moves came to your mind like a continuous flow and you were also quite fast in choosing. Know the feeling, eh?

If instead you don’t have many tournament games yet, then no problem! Go on Lichess.org and start playing 🙂

Here’s how you should do it:

Of course this will take some time. Probably a few days or weeks. That’s okay.

When you’re done, it’s time to draw some conclusions! If you played in LiChess as I suggested, then it’s quite easy

At this point the website will generate a whole bunch of statistics for you, that you can use to understand your own games better, including which openings perform the best in your hands!

If you didn’t use LiChess then it’s not a big deal anyway, I bet you can draw similar conclusions just by looking at the games once more. 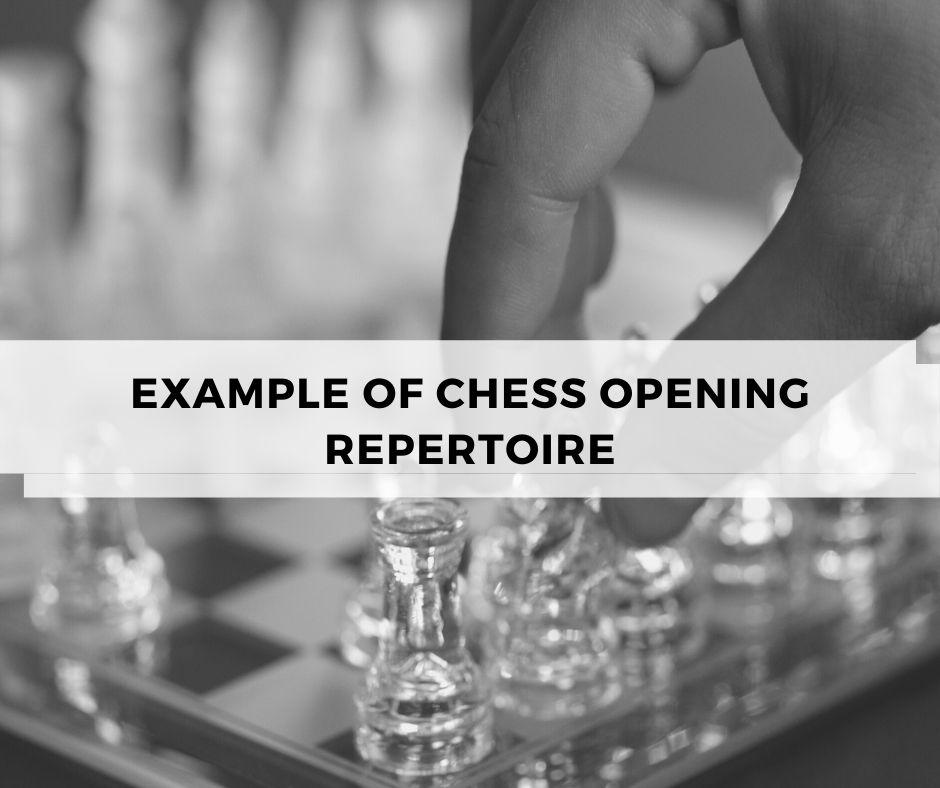 Now that you have some interesting statistics available about your own games, it’s time to choose your repertoire.

At this point you should focus on one and only one openings for each main variations. For example, as white you should have only one first move. If it seems strange, think that you will need to study all possible defenses that Black has against that opening!

Let’s now through a few examples.

Let’s say that you are in love with open positions and sharp attacks. You think that this type of positions suit better to you, and the statistics about your games confirm it. Your repertoire might look like the following:

Notice that this is a very ambitious repertoire. It implies that you will have to study all the mainlines in the Spanish, Sicilian and French defenses, that are very complex lines! They are also very combative types of position, so they would probably fit well your nature.

It’s common though, for club-players, to choose some secondary line against the main defense. The goal is to keep the amount of theory limited, and to try to get to similar structures by several routes.

I definitely recommend this approach. It’s a good way to learn very well and at great depth a few lines, in limited number, before expanding your repertoire further.

With respect to the previous example, here is how it would change.

Let’s consider now the case of the same player that likes street fight wars a lot, and feels at home in open, spicy battles.

The objective with Black is, first of all, to choose one and only one main defense, against every possible first move. And then, of course, to select sub-variations for each possible approach by White.

As you can see, there’s quite a lot of work to be done. That’s okay though! Building a Opening Repertoire from scratch is not a 1-week effort! It will take time, but it will be well-spent time.

I have two more suggestions for you.

First, when you have the list of openings that you want to include in your Repertoire, keep this list at hand, and each time you complete one of them put a nice tick next to the name, so you will see how far are you from completing your repertoire!

In second place, I warmly recommend that you dedicate all time and focus that you can to each opening. Don’t rush just for the sake of completing your database. Every hole that you leave in your preparation will have to be filled in future, or else it will bring you problems when you play real games.

Therefore, stay focused on each opening and before to switch to next one on the list be sure you’ve dedicated the right amount of time to it, and you’ve analyzed it as deeply as you could.

How to keep your Opening Repertoire Up to Date 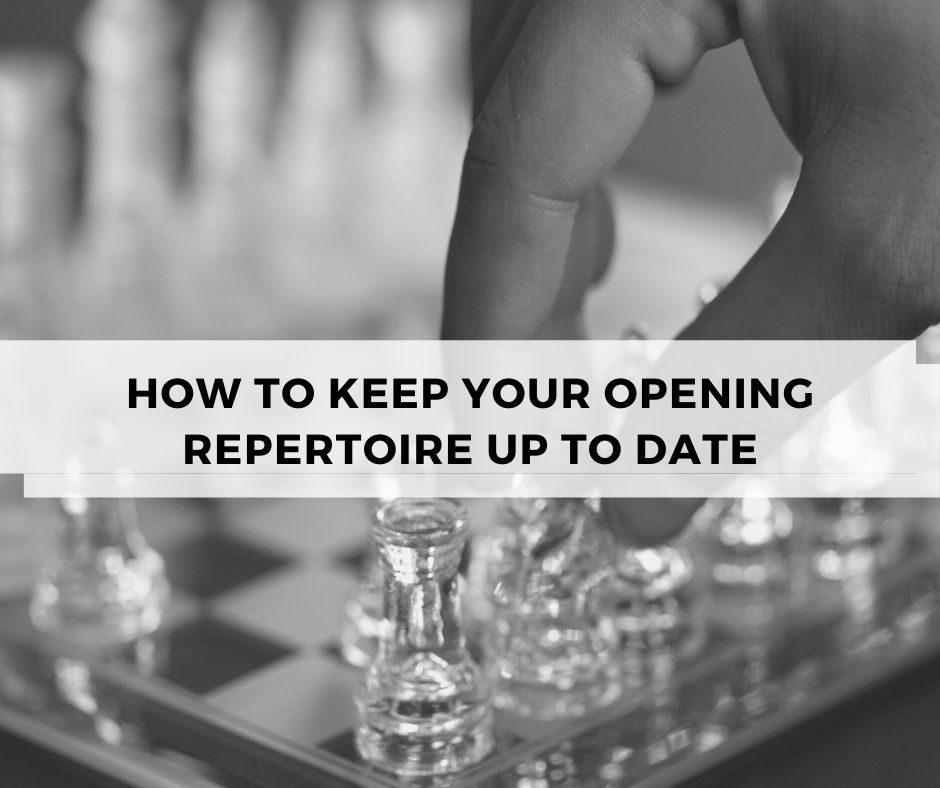 After a while and a lot of work you finally have your database with many files, each one for one of your repertoire openings.

Now it comes the question: how do I make sure that my repertoire is up to date with the latest ideas in the opening theory? I will answer this question in a couple of steps.

First of all, hopefully you’ve chosen well known variations, that have been played for decades. In this case, you don’t have to worry about your opening being refuted any time soon, and you can confidently play it even if you missed some recent important games.

That being said, GMs work very very hard every day to find novel ideas in all opening schemes. Often the “novelty” is not something drastic, it simply is a new strategical plan that does not change the evaluation of the position but may catch the opponent off-guard if (s)he does not know how to react.

So, in this sense, it’s important to check periodically what updates there are in your lines. You can do this in a number of ways.

First and foremost, by checking top-GM games. The good part of this, is that you probably do check their games anyway, regardless of your repertoire. From now on, when you check out some top tournament games, or maybe watch a live commentary, keep an eye on your repertoire too.

When a game in the tournament you are following is played in one of “your” openings, then double and triple check how the GMs handle that position, what strategic plans and what tactical shots they have in mind.

If you spot something interesting then update the file in your database by also mentioning the details of the game, as well as the players comment and the engine evaluation.

The other great way to keep the repertoire update is by doing the same procedure but with less well known tournaments. This requires more effort because these tournaments, although full of GMs, often are not streamed live nor published in the news.

Luckily for us, there exists The Week In Chess! TWIC is a online repository of games, and what’s really great about it is that games collection are taken by the most important tournaments in the world and published weekly.

As you can imagine, this way of doing requires more time and effort than just checking out elite tournaments. Also, it’s unlikely that you will have time every week to do that (I never had!).

However, it should not be a big deal. Just get the last TWIC every time you have some time and work through it as described above. Probably it won’t make much difference if you skip some weeks, so don’t worry about it. Maybe set an event in your calendar to force you to do so!

How to change Opening Repertoire 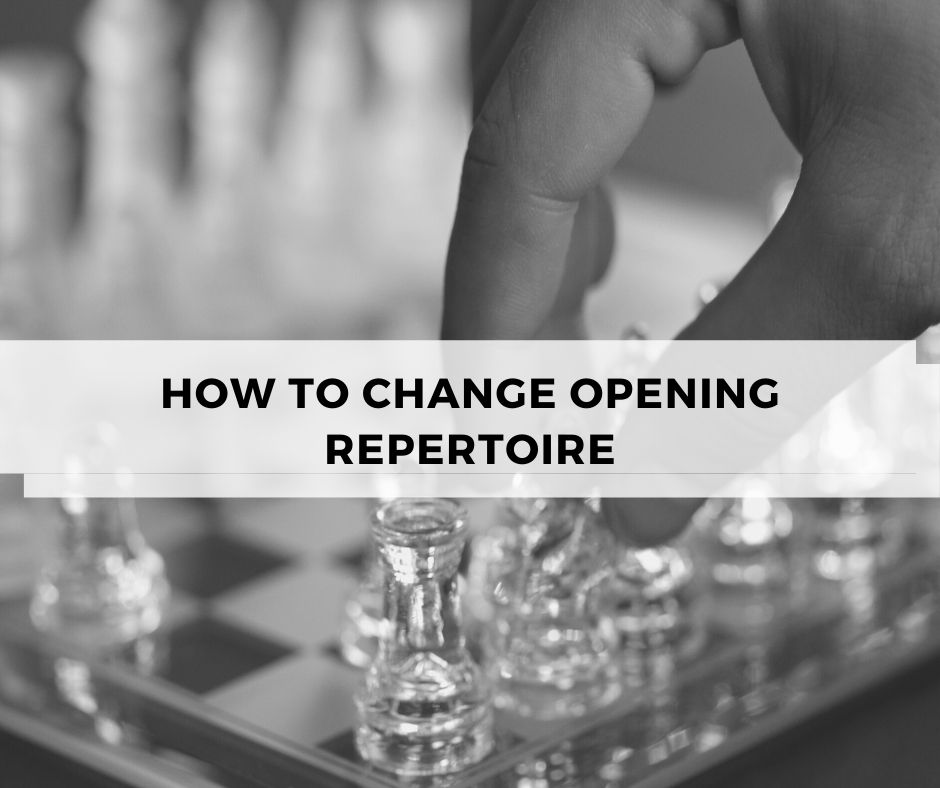 One thing that you will want to do after a while is to change some of “your” openings. It’s totally normally, everybody gets bored of playing over and over again the same type of position.

The one thing you should avoid is to change repertoire too often. Wait the time to become really good at one opening, before changing it. This is very important for your chess growth, and general understanding of the game.

In other words, once you settle on a opening, stick to it for a while before changing it. Change it only when you feel really confident that you’ve learnt the subtleties of it.

The good news though, is that changing Opening Repertoire is not like inventing a new science. You “just” have to do what you already did, over again.

Watch out though: you should NOT change your entire repertoire at once. Choose one opening in your current repertoire, maybe the one that you know best, and replace it with a new opening. This “new entry” could be one of the top-choices that you left out when deciding the previous repertoire, for example.

In this article I walked you through the choices that a player has to make when deciding her/his own opening repertoire.

Building a personal repertoire is the primary way to familiarize, and then become expert, in a given set of positions, their structure, strategic plans and tactical patterns.

Therefore do now wait any longer. Start building you own Opening Repertoire today!