How to Get a Chess Elo Rating 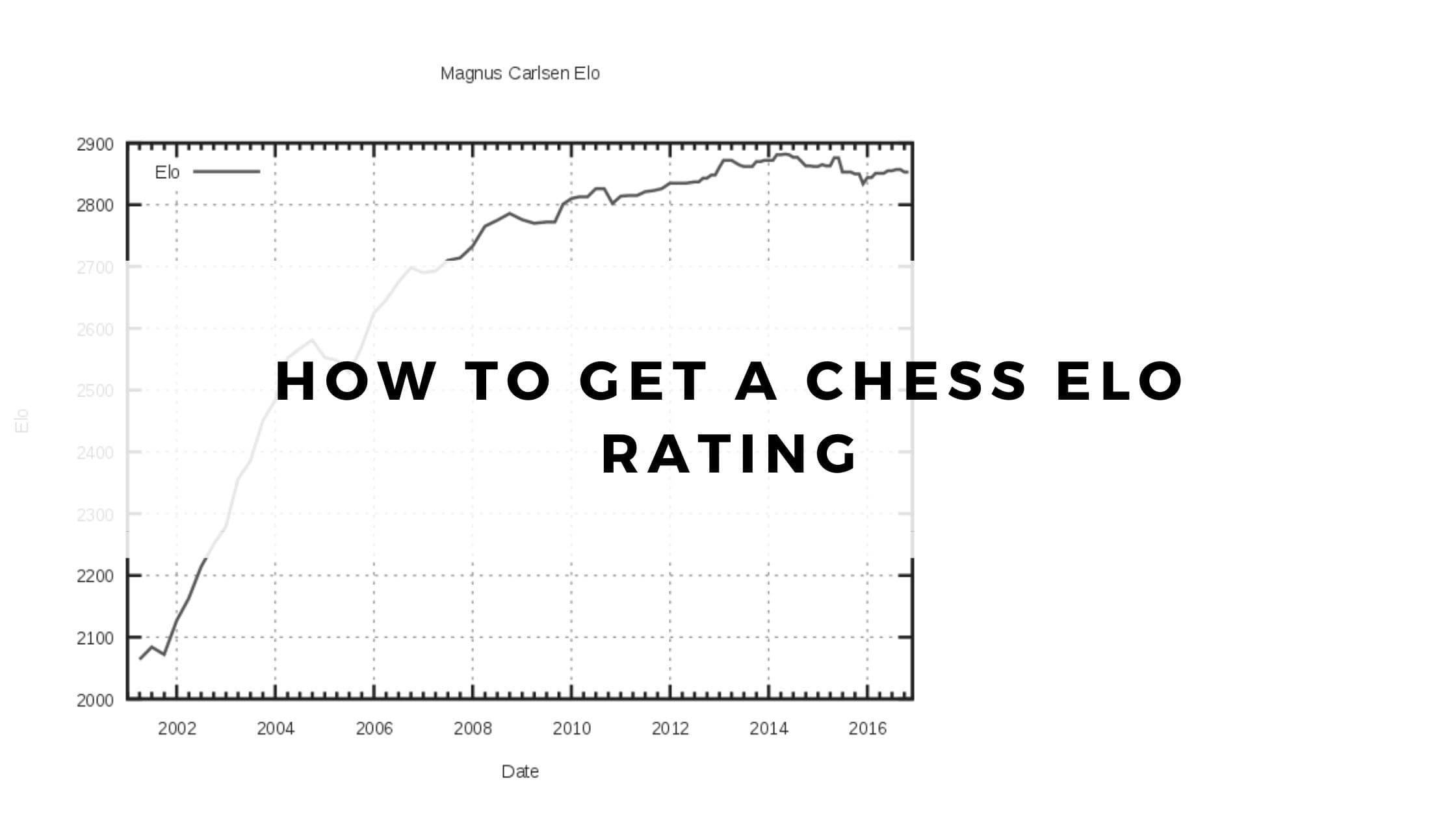 One of most common word in the chess world is Elo rating. This identifies the personal rating of a player, that should tell about her or his strength. Novel players therefore ask how to get some Elo rating for the first time, and of course how to maximize the entering point in this ranking.

There is actually a lot more to say and to clarify regarding the above calculation, so I am going to give more details and to explain better the (quite complicated) paragraphs of the FIDE handbook on this subject. Keep reading!

What does Elo rating mean? 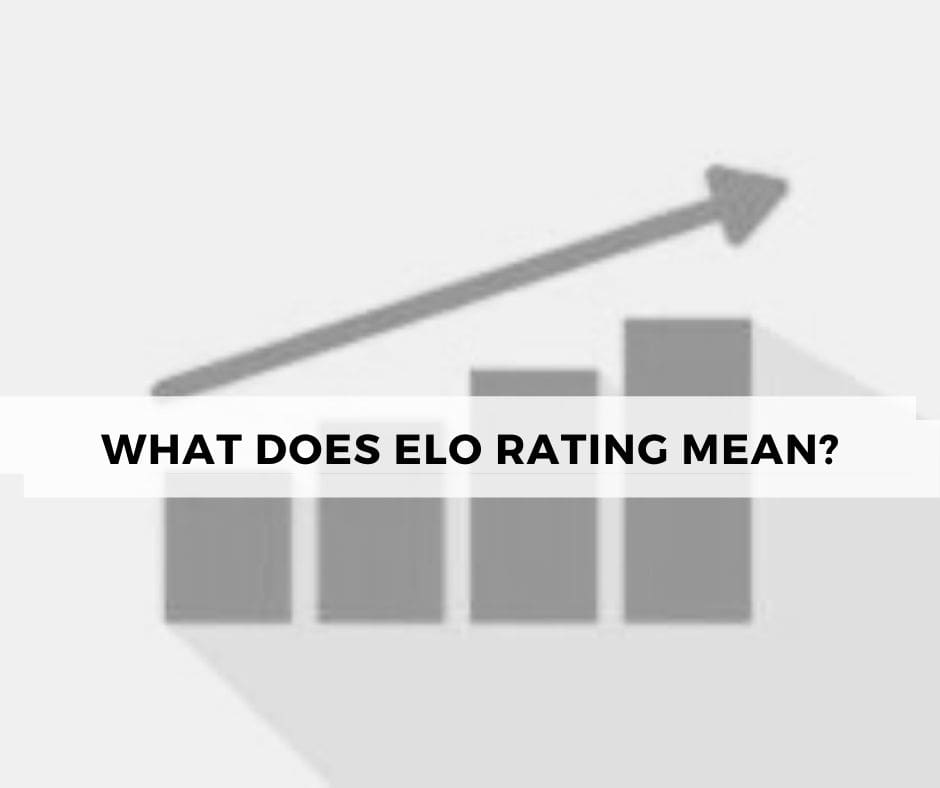 Contrary to what you might think, “Elo” is the last name of a person! Arpad Elo (1903-1992) was a professor of physics at the Marquette University, and he invented the rating system that is adopted today by the International Chess Federation (FIDE).

Generally speaking, you can imagine the Elo rating like a quick system to tell how strong is a player. So for instance, Magnus Carlsen (currently the World Champion) has a rating of about 2840 points. I have a rating slightly below 2200 points. That tells you about the large gap between him and myself!

While there is no theoretical limits in the Elo system, you can set the boundaries more or less to 1300 (for weak players) and to 2850 (for the top players in the World). The highest Elo ever was 2889, reached by Magnus Carlsen in 2014. Carlsen himself could not keep that rating for very long, and as I said he’s currently below 2850. Still the number 1 in the world though!

Let me try to give a broad overview of the different levels of Elo:

How does my Elo rating change after a game? 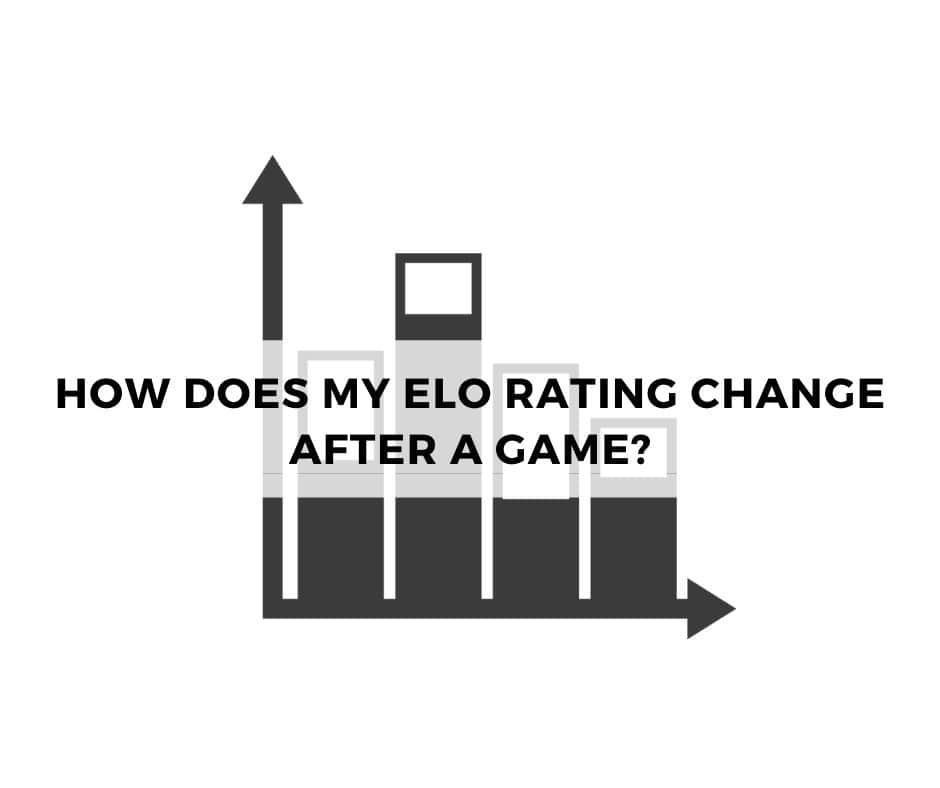 Also important to know is the way the Elo rating varies after each game. When you play against someone in a rated game (that is, valid for the Elo variations), you can either gain points, loose some or just keep the same rating.

The amount of points you gain or loose depends on the difference between your current Elo and your opponent’s rating. For instance, if the two of you have a very similar Elo rating, and you draw the game, then no change will be applied to your rating.

If there is a big difference then it gets more complicated. For example, if Magnus Carlsen beats me in a rated game (so let’s say 2850 Elo versus 2200 Elo), then he would gain 0.8 points only. However, in the same game, I would loose 1.6 points.

If instead I win a game against Magnus, then I would gain 18.4 points, while he would loose 9.2 points. Why is that so strange? The reason is that each player, along with her/his Elo rating, also has a coefficient. This coefficient has less variability than the Elo, and it’s just a number used to perform the calculations.

So for example, Magnus and his fellow top-GMs all have this coefficient set to 10. However, mine is 20. This makes my variations be larger then theirs. In other words, I can gain or loose more points in a single game than them. The rationale behind this is that the stronger you have become across time, the less variations you should have now, so your coefficient gets smaller. The minimum for it is 10, whereas the maximum is 40.

Honestly, rather than driving yourself crazy with these strange calculations, just use the Elo variation online official calculator. You need to enter your Elo (“Rating”), your opponent Elo (“Rc”), the result of the game (“W”), and your coefficient (“Kval”).

How to exactly compute the Elo rating for a new player? 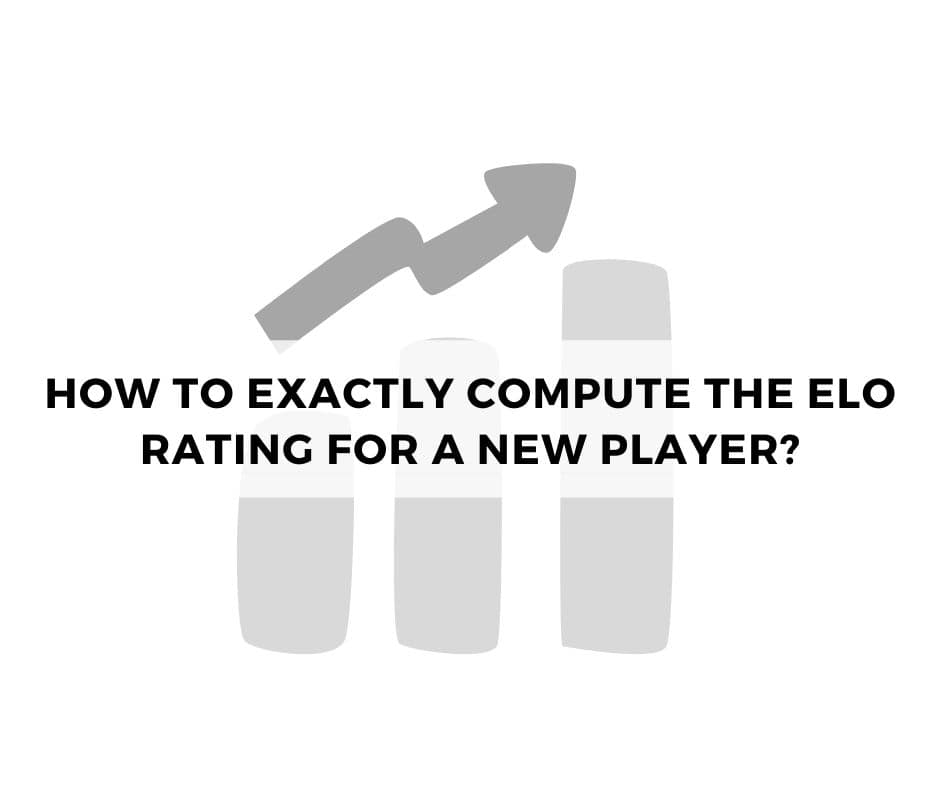 So, once you know how to easily compute the variation you get after each rated game, the question is how to get an initial Elo rating. What I mean is, when you play your first tournament, what is you Elo?

Actually it’s none! Technically, we say you are unrated. It takes a few games before you can get an official rating. I explained at the beginning of this post what is the calculation to perform to know your official rating, but, to tell you the truth, I approximated a bit the overall rule to let you grasp the concept. Let’s now go more onto the details!

Before we start, I guess I also want to give you my “professional” opinion that the official documentation about this subject is… not well written (I am being polite). But I’ll give you the link to it anyway.

So let’s go again through the initial steps:

Now there are three cases that we need to distinguish:

For the first case we are lucky: your rating will be exactly the average of your opponents' ratings.

Now take the average opponents' rating and simply add 20 Elo points for each half point more that you scored. For example, if you scored 4 out of six against 6 players whose average rating is 2000 Elo, than your initial rating would be 2040.

The third case is definitely the least lucky. Unfortunately the rule described in the FIDE “handbook” is really obscure (and for sure it wasn’t written by a scientist). You have use two tables that are provided in the handbook, to look up what is the expected variation for your opponents average ratings, and their opponents rating (in the same tournament).

However, if you are happy with a rough approximation then you can follow the rule that I gave above: subtract 50 Elo points from your opponents' average for each half point that you scored less than the 50% threshold. So again for example, if the average was 2000 and you scored 2 out of 6, that would be 2 half points less than 50% and so you can approximate your initial rating to 1900.

If instead you don’t like approximate calculations then you can use the official calculators on the FIDE website. Good luck! 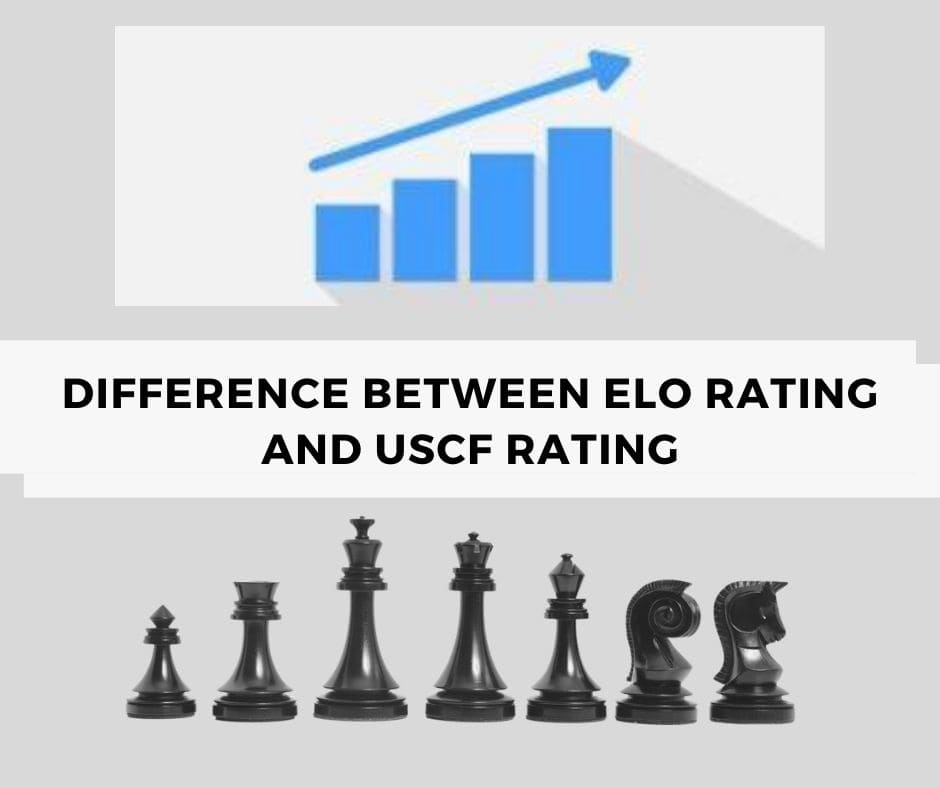 The other piece of information that you want to have is that the Elo system is the official rating system used by FIDE. However, there are several others systems that are more or less used.

To start with, until some time ago almost all national federations had their own national rankings. It was quite messy when travelling abroad and playing chess in another country! Luckily, they are trying to move away from this and switching to the official FIDE ranking everywhere.

In the US there is the United States Chess Federation ranking system (USCF). It’s quite different from the Elo, at the least in terms of classes. Let me report the table that wikipedia gives:

In some aspect this is similar to the Elo system, but in others it’s totally different. Furthermore, it lacks the entire distinctions between FM, IM and GM, that is incredibly important.

I have to say though, that the USCF rating system was used mainly in the 1970s', and that now the “really” official system is Elo in the US too. The problem is that often players refer to their own strength by mentioning their USCF rating, which can be quite confusing (especially to the younger players!). 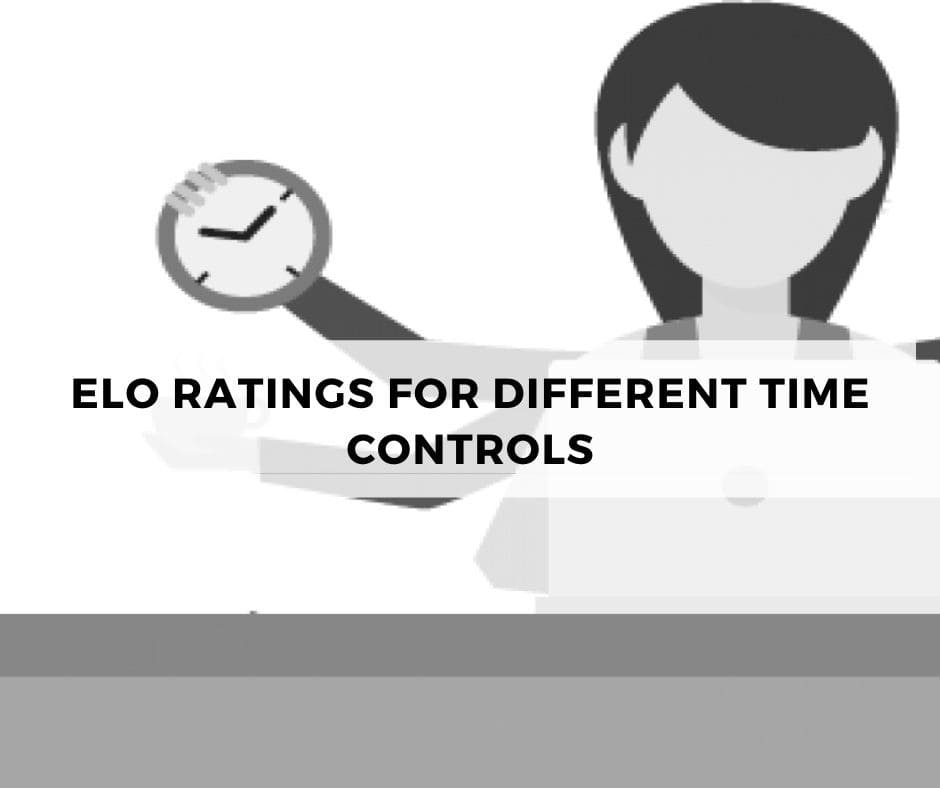 Chess is evolving quite a bit, my friends! There was a time when the only played games were very very long, and no other format was officially supported.

Things have changed quite a bit, and chess is becoming… faster! In particular, chess games are becoming shorter, on the timing side. And faster time controls are extremely popular, especially blitz and bullet.

With a whole lot of blitz and rapid tournaments played worldwide, FIDE decided to use the Elo rating also to rate these competitions. So today each player has 3 official Elo ratings: one for classical chess, one for rapid and one for blitz.

What is the Universal Chess Rating System? 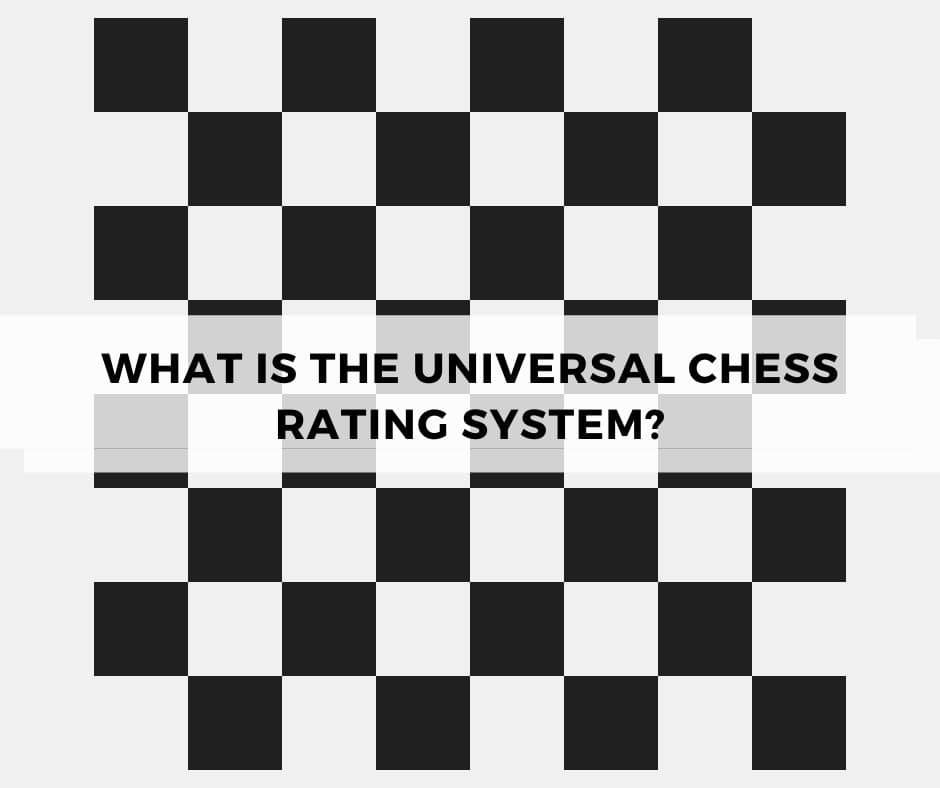 The Universal Rating System (URS) is yet another Chess Rating System, invented quite recently. And I mean, very recently: it was used the first time to determine the participants to the Grand Chess Tour 2017. So the Saint Louis Chess Club is pushing towards the usage of this system, in some sense.

The main difference with the Elo system is that the Universal system proposes just one rating for each player, that is a combined scored of the three ratings that FIDE uses (classical, blitz, and rapid). This way, each player has one rating only, and it’s probably easier to make comparisons.

According to the official website, the development of URS started in 2015 when a team of academic researchers was tasked to address this challenge. I do suggest you to take a look at the official page; I find this effort very interesting, especially in the comparisons that they have been doing among players, past and present.

As of today, the URS rating for the top-5 position is:

So once again, Magnus Carlsen is number 1 in yet another rating! The other 4 are very close each to another.

How to increase the Elo rating?! 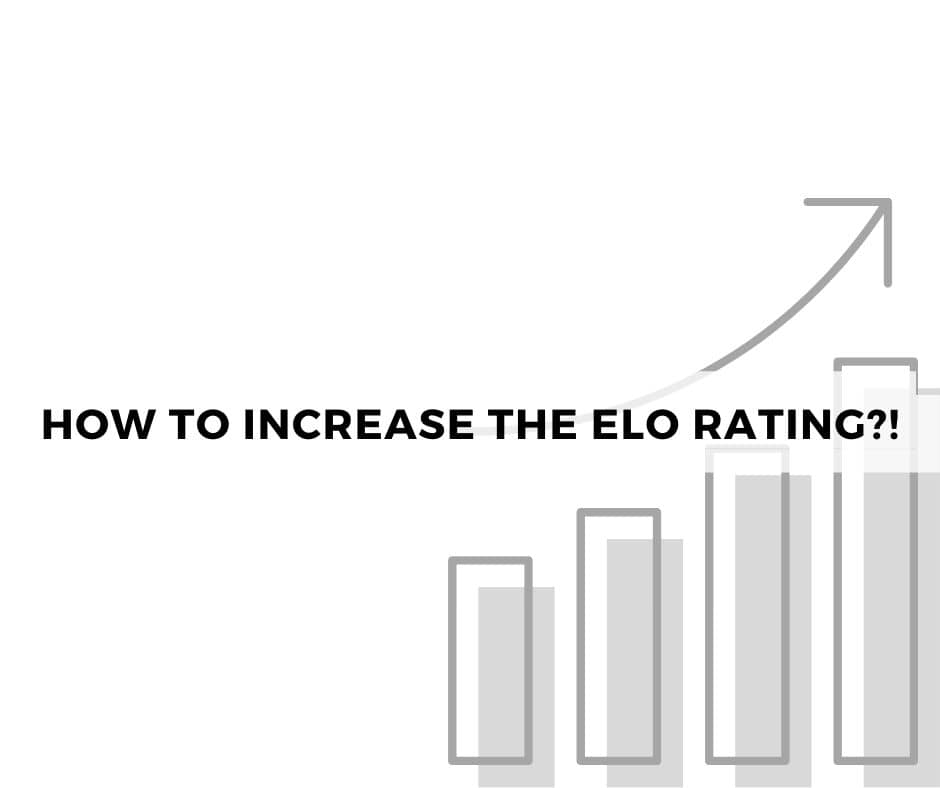 I added this section in a provocative fashion!

In general, all players reach their “stable point” in a small number of tournaments. Let’s say approximately ten tournaments. What does this mean? I meant that during the first tournaments you’ll be playing your Elo will change very rapidly, either increasing or decreasing at very fast pace.

At some moment though, this steep curve will slow down, and you will sit on a certain Elo rating for quite some time. What exactly is this point? Difficult to say, and it will depend on your talent, and luck!

If you start seeing that your Elo becomes stable, even though you keep playing, then that is THE moment to put more effort on the table. Keep training harder than ever, maybe with a coach. Analyze your games as deep as you can. In fact, I basically stopped working on chess when I reached my personal stable point (a bit less than 2200), due to my studies first and my job later, and I never moved away from that Elo.

It’s never too late though!

What is the online Elo rating 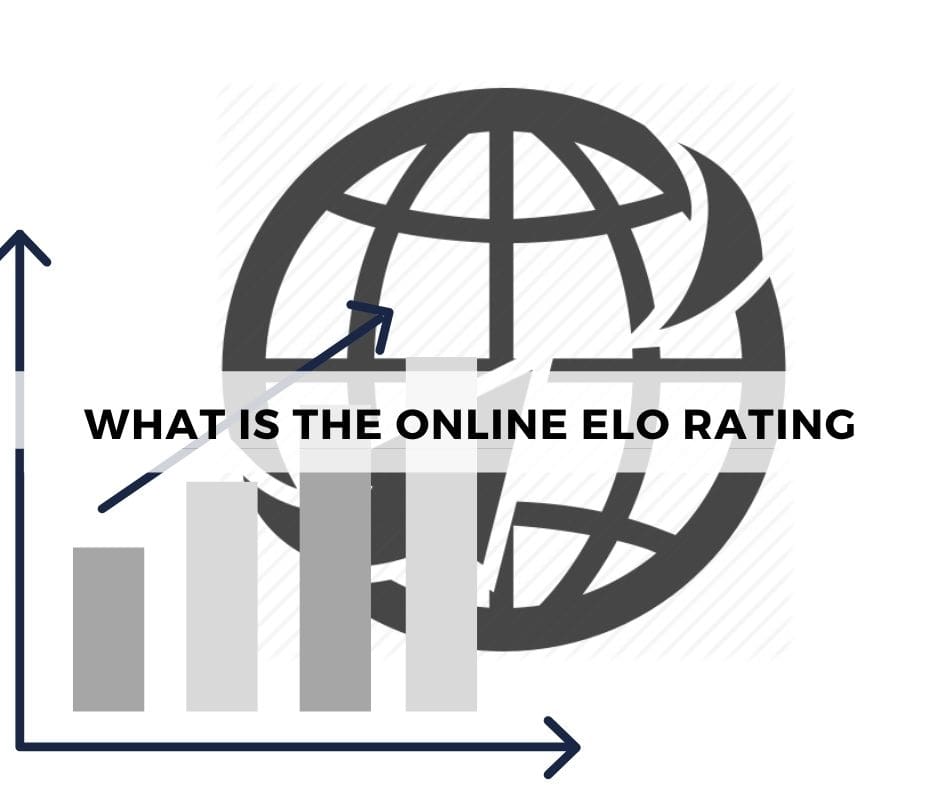 I want to end this post with a note about the “online” rating systems. Virtually, every web platform where you can play chess also assign to you a rating.

This rating is entirely virtual and its only scope is within the same platform that created it. Basically, the website uses it to decide who plays with whom, and how well you do when you play in that platform.

Also, many people use chess engines when they play online, so their online ratings are totally fake. Watch out, I am not criticizing those who do. Sure, doing it “just because” is very silly, but I often think that using the engine while playing could be a interesting way of training. I have never done so, but I plan on researching a bit about this subject, and possibly share with you my thoughts in a future post.

To give you an idea of how the online ratings can differ from your real Elo, let’s analyze my case. My classic Elo rating is a rusty 2180 at the moment. I haven’t played basically in more than a year and I haven’t trained seriously maybe in 4-5 years. In Lichess.com, currently my favorite platform, I only play 5+0 blitz games, and I have about 2300 points. In Chess.com, another popular platform that I haven’t used in a while, I also only played 5+0 games and my rating was about 2200.

However don’t make the conclusions that Chess.com provides a better estimate. Simply, I have played less games there, and none in a long while. I don’t think either of those two platforms is very reliable in terms of rating. And not because of the calculation they make (that’s actually the same of FIDE, probably), but simply because of the “playing conditions”. When playing online you are likely often distracted by many factors, and so are your opponents.

In this post I think I said all I know about Elo system and other rating system for chess! If I forgot something please let me know in the comments!